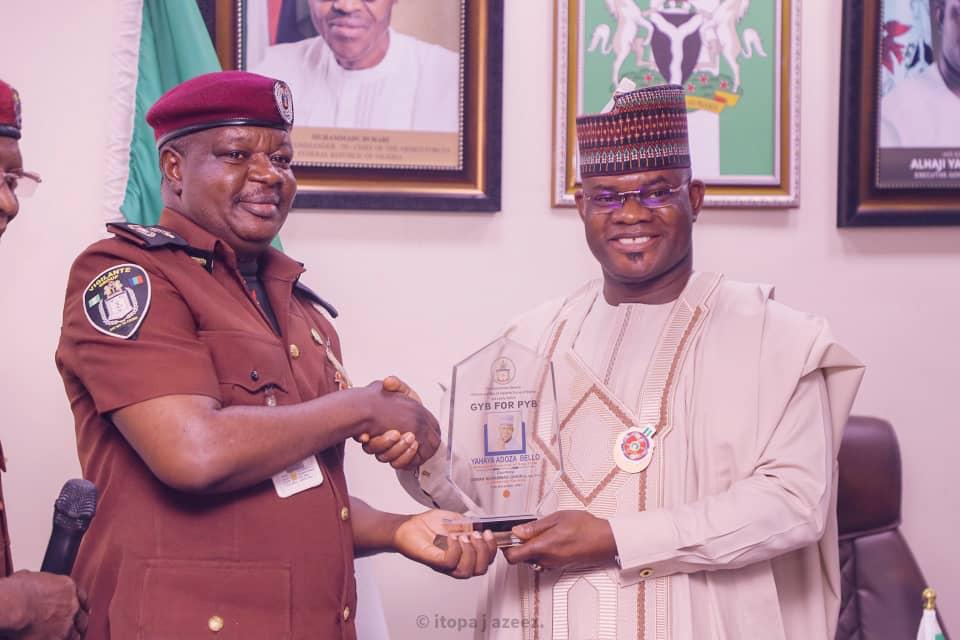 The Vigilante Group of Nigeria has declared their full support for Governor Yahaya Bello of Kogi State to succeed President Muhammadu Buhari as next President of the country in 2023.

The group described him as a true Nigerian who has shown both in action and character his intentions to unify and secure the nation.

Speaking through its Commander General, Dr. Usman Muhammed, during the group’s courtesy visit to Governor on Saturday, he noted that the Governor’s contributions to VGN in Kogi state is worthy of commendation adding that with him at the helm of affairs in the country similar gesture would be extended to the VGN National body in a bid to further enhance their capacity for efficiency

The CG stressed that they were totally behind the Governor’s transition to Aso Rock in 2023 and had since began an advocacy campaign among its over 5, 000, 000 registered members across the 36 states of the federation for the governor.

He assured that if the VGN was well positioned and equipped, it has all it takes both in human power and will to combat the challenges of banditry, terrorism, kidnapping and other evil vices the country was currently faced with

Governor Bello in his response thanked the Vigilante Group for the show of love for President Muhammadu Buhari, the country, himself.

He also commended them for their continued services to their country adding that as long as “we all continued to pray for the President, the Nation would experience progress.”

He also urged citizens to reflect on the situation and circumstances of things before the president’s emergence in 2015 adding that despite the difficult, turbulent and treacherous circumstances, the president was still performing

Governor Bello however pointed out that the responsibility of fixing the country is with leaders from top to bottom and across religion, tradition and even at the various family institutions noting that every individual has a role to play in National Development.

He indicated that the modest achievements in several highlighted areas in Kogi state were combinations of the people’s resolve and leadership will suggesting that the only way that citizens will continue to have a country is when the citizens resolved to ensure the unity, peace and progress of their country.

According to him, many of the security challenges in the country were either politically motivated or lack of political will by leaders to tackle them head on.
He expressed confidence that the VGN is a ready made asset that is well organized and the willingness to serve the nation.
Bello said if given the opportunity to lead, the group would be properly integrated into the security architecture of the country

The Governor charged them to continue to work with their respective State Governors and leaders irrespective of their political or religious affiliation in a bid to secure the nation.

He assured them that in due cause politicians perpetrating evil would be exposed.