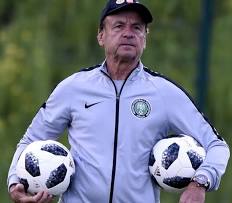 Finally the Nigeria Football Federation (NFF) has taken the bull by the horn as it has sacked Gernot Rohr.

Eguavoen, the Technical Director of NFF, was named Technical Adviser of the Super Eagles on an interim basis.

General Secretary of the NFF, Dr Mohammed Sanusi said: “The relationship between the Nigeria Football Federation and Mr Rohr has come to an end. We thank him for his services to the Super Eagles and Nigeria.

“We also want to thank the Federal Ministry of Youth and Sports for their collaboration and guidance all through.”