Buhari assents to N17.127Trillion budget in company of Lawan, Gbajabiamila 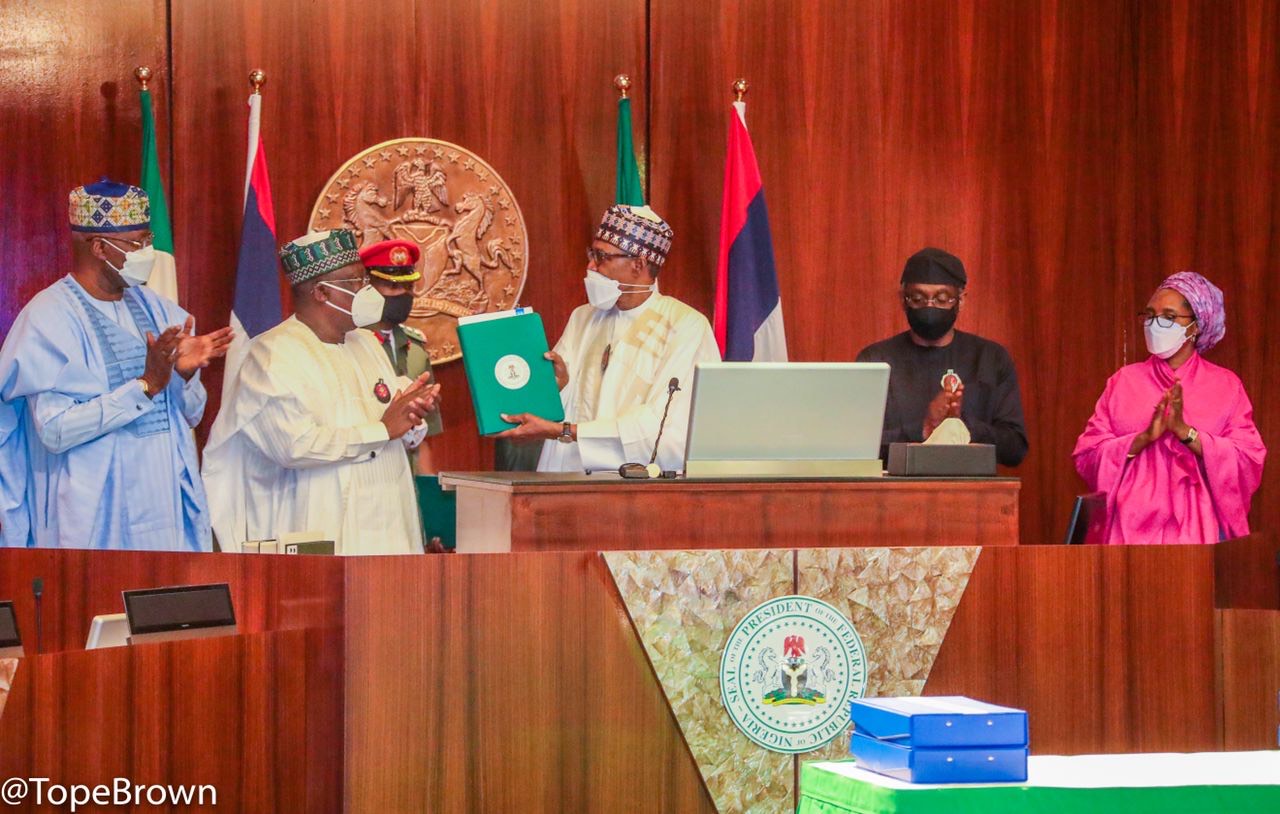 President Muhammadu Buhari on Friday in Abuja signed into law the 2022 Appropriation Bill and the 2021 Finance Bill.

The President signed the documents in the Presidential Villa in the presence of Senate President Ahmed Lawan, Speaker of the House of Representatives, Femi Gbajabiamila, and other members of the Federal Executive Council.
The President’s is in keeping with the tradition of restoring a predictable January to December fiscal year, as provided for in the Constitution of the Federal Republic of Nigeria,

Speaking at the event, the President said the 2022 Budget, just signed into law, provides for aggregate expenditures of N17.127 trillion, an increase of N735.85 billion over the initial Executive Proposal for a total expenditure of N16.391 trillion.

The President explained that N186.53 billion of the increase however came from additional critical expenditures that he had authorized the Minister of Finance, Budget and National Planning to forward to the National Assembly.

‘‘The Minister will provide the public with the details of the budget as passed by the National Assembly, and signed into law by me,’’ he said.

The President announced that as the 2023 Budget is going to be a transition budget, work will start in earnest to ensure early submission of the 2023-2025 Medium-Term Expenditure Framework and Fiscal Strategy Paper as well as the 2023 Appropriation Bill to the National Assembly.

He, therefore, directed Heads of Ministries, Departments and Agencies (MDAs) to cooperate with the Ministry of Finance, Budget and National Planning, more specifically with the Budget Office of the Federation, to realise this very important objective.

President Buhari also expressed strong reservations on the ‘‘worrisome changes’’ made by the National Assembly to the 2022 Executive Budget proposal.

He announced that he would revert to the National Assembly with a request for amendment as soon as the Assembly resumes to ensure that critical ongoing projects cardinal to this administration do not suffer a setback due to reduced funding.

The President recounted that during the presentation of the 2022 Appropriation Bill, he had stated that the fiscal year 2022 would be very crucial in his administration’s efforts to complete and put to use critical agenda projects, as well as improve the general living conditions of our people.

‘‘It is in this regard that I must express my reservations about many of the changes that the National Assembly has made to the 2022 Executive Budget proposal.

‘‘Some of the worrisome changes are as follows:

‘‘Increase in projected FGN Independent Revenue by N400 billion, the justification for which is yet to be provided to the Executive;

‘‘Reduction in the provision for Sinking Fund to Retire Maturing Bonds by N22 billion without any explanation;

‘‘Reduction of the provisions for the Non-Regular Allowances of the Nigerian Police Force and the Nigerian Navy by N15 billion and N5 billion respectively.

‘‘This is particularly worrisome because personnel cost provisions are based on agencies’ nominal roll and approved salaries/allowances;

‘‘Furthermore, an increase of N21.72 billion in the Overhead budgets of some MDAs, while the sum of N1.96 billion was cut from the provision for some MDAs without apparent justification;

‘‘Increase in the provision for Capital spending (excluding Capital share in Statutory Transfer) by a net amount of N575.63 billion, from N4.89 trillion to N5.47 trillion.’’

President Buhari also expressed concern in the reductions in provisions for some critical projects, including N12.6 billion in the Ministry of Transport’s budget for the ongoing Rail Modernisation projects; N25.8 billion from Power Sector Reform Programme under the Ministry of Finance, Budget and National Planning; N14.5 billion from several projects of the Ministry of Agriculture, and introducing over 1,500 new projects into the budgets of this Ministry and its agencies.

Further, the President also expressed his reservations on the following:

‘‘Inclusion of new provisions totaling N36.59 billion for National Assembly’s projects in the Service Wide Vote which negates the principles of separation of Powers and financial autonomy of the Legislative arm of government.

‘‘The changes to the original Executive proposal are in the form of new insertions, outright removals, reductions and/or increases in the amounts allocated to projects.

‘‘Provisions made for as many as 10,733 projects were reduced while 6,576 new projects were introduced into the budget by the National Assembly.

‘‘Reduction in the provisions for many strategic capital projects to introduce ‘Empowerment’ projects.

‘‘The cuts in the provisions for several of these projects by the National Assembly may render the projects unimplementable or set back their completion, especially some of this Administration’s strategic capital projects.

‘‘Most of the projects inserted relate to matters that are basically the responsibilities of State and Local Governments, and do not appear to have been properly conceptualised, designed and costed.

‘‘Many more projects have been added to the budgets of some MDAs with no consideration for the institutional capacity to execute the additional projects and/or for the incremental recurrent expenditure that may be required.’’

President Buhari declared that it was surprising that despite the National Assembly increasing projected revenue by N609.27 billion, the additional Executive request of N186.53 billion for critical expenditure items could not be accommodated without increasing the deficit, while the sum of N550.59 billion from the projected incremental revenues was allocated at the discretion of National Assembly.

‘‘I signed the 2022 Appropriation Bill into law to enable its implementation to commence on 1st January 2022.

‘‘However, I will revert to the National Assembly with a request for amendment and/or virement as soon as the Assembly resumes to ensure that critical ongoing projects that are cardinal to this administration, and those nearing completion, do not suffer a setback due to reduced funding.’’

On COVID-19 and budget implementation, the President said despite the lingering adverse effects of the pandemic, he was happy with the success recorded in the implementation of the 2021 Budget.

‘‘The sum of N3.94 trillion that was provided for the implementation of capital projects by MDAs during the fiscal year has been released fully.

The President commended the understanding and speedy action of the National Assembly on this matter.

‘‘As the 2022 Budget will be the last full year budget to be implemented by our Administration, its effective implementation is very critical for delivering our legacy projects, promoting social inclusion and strengthening the resilience of the economy.

‘‘The Ministry of Finance, Budget and National Planning will implement all measures required to ensure timely and targeted release of capital votes.

‘‘All MDAs are to effect early commencement of project implementation, while ensuring productive use of funds provided for achievement of the objectives set for their sectors.

‘‘Considering the incidence of new COVID-19 variants globally, we will ensure timely implementation of measures provided for in the 2022 Budget to contain the spread of the virus and protect our people.

‘‘We continue to count on the collaboration of the State governments in our effort to protect the lives and livelihood of our people.’’

To achieve the laudable objectives of the 2022 Budget, President Buhari pledged that the Federal Government would further intensify revenue mobilisation efforts.

He expressed optimism in the ability of the Government to finance the budget considering the positive global oil market outlook and the continuing improvement in non-oil revenues.

‘‘To achieve our revenue targets, revenue generating agencies, and indeed all MDAs must ensure prompt and full remittance of collected revenues.

‘‘Relevant Agencies must also ensure the realisation of our crude oil production and export targets.

‘‘I also appeal to our fellow citizens and the business community at large to fulfil their tax obligations promptly.

‘‘However, being a deficit budget, the specific Borrowing Plan will be forwarded to the National Assembly shortly.

‘‘I count on the cooperation of the National Assembly for a quick consideration and approval of the Plan when submitted.

‘‘All borrowings will be judiciously utilised and invested in our future growth and prosperity.’’

The President also directed MDAs to liaise with the Bureau of Public Enterprises and/or the Infrastructure Concession and Regulatory Commission to explore available opportunities for public-private partnerships, concessions as well as climate finance arrangements to fast-track the pace of infrastructural development.

He thanked the Ministers of Finance, Budget and National Planning, the Budget Office of the Federation, and all who worked tirelessly and sacrificed so much towards producing the 2022 Appropriation Act.

‘‘Let me conclude by commending the understanding, sacrifice and resilience of our people during these challenging times.

‘‘As a Government, we remain committed to improving the general living conditions of our people.

‘‘We will continue to implement measures aimed at moderating the unintended negative effects of policies on the citizenry,’’ he said.