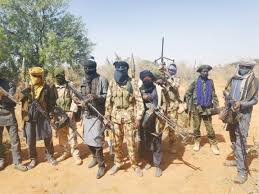 Unknown gunmen have struck again in Kogi, abducting the mother of Governor Yahaya Bello’s Chief of Staff, Pharmacist Abdulkareem Asuku at her residence in Adavi Local Government Area of the state.

The mother of the Chief of staff, Mrs Seriya Raji, residing in the new layout of Nagazi community, Adavi LGA was abducted around 7:40pm on Monday evening after observing her prayer in a Mosque within her compound.

Residents told our correspondent that the community was thrown into panic mood when the gunmen numbering 6 stormed the place in a commando style.

The abductors, according to the source, were  dressed in black suits with masks bearing “Ghana Must Go” bag suspected to be contained some guns and other dangerous weapons.
It was gathered that the hoodlums gained entry  through the mosque from where they whisked her away to a yet- to-be identified destination in the car they came in.
The State has been under siege of kidnappers in recent weeks.
It would be recalled that the state Commissioner for Environment, Victor Omofaiye also narrowly escaped  being kidnapped but not without gunshot wounds when the kidnappers opened fire on his vehicle.