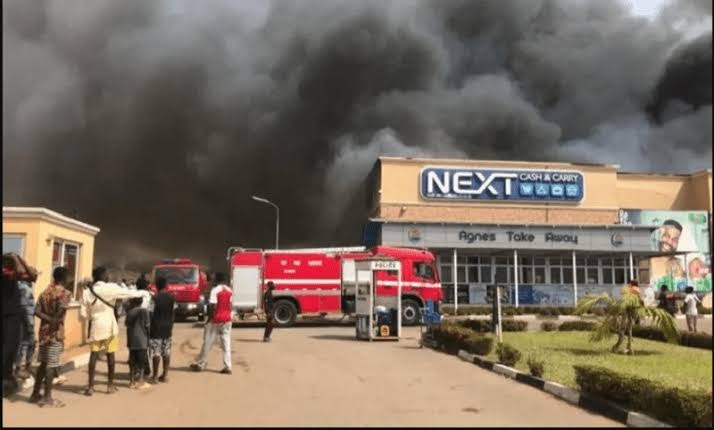 The Minister of Humanitarian Affairs, Disaster Management and Social Development, Sadiya Umar Farouq has expressed sympathy over the inferno that raised a popular shopping complex Next Cash and Carry in Abuja on Boxing Day.
Umar Farouq expressed deep sympathy for the loss of goods and property worth billions of Naira, in the fire incident.
In a statement issued on Monday by special adviser on media to the minister, Nneka Ikem Anibeze, she quoted the Minister to have also decried the rising incidences of fire disasters in the country as she called for caution to avoid future occurrences.
Umar Farouq has since directed the National Emergency Management Agency (NEMA) to help in rescue operations to salvage some of the items on the day of the inferno.

“This is a sad occurrence happening on a day of celebration. It is most unfortunate for those who lost their goods and livelihood at this critical time.

“This is the harmattan season that is proned to sparks and fire disasters. We urge shop owners, traders and market dwellers to be more vigilant and endeavour to switch off all appliances before leaving their shops and market. Report any suspicious movements to security operatives.

“The fire in Next Cash and Carry is very unfortunate and we pray that this does not happen again”.
The Shopping complex which caught fire in the night of Christmas Day was said to have been caused by an electrical malfunction.