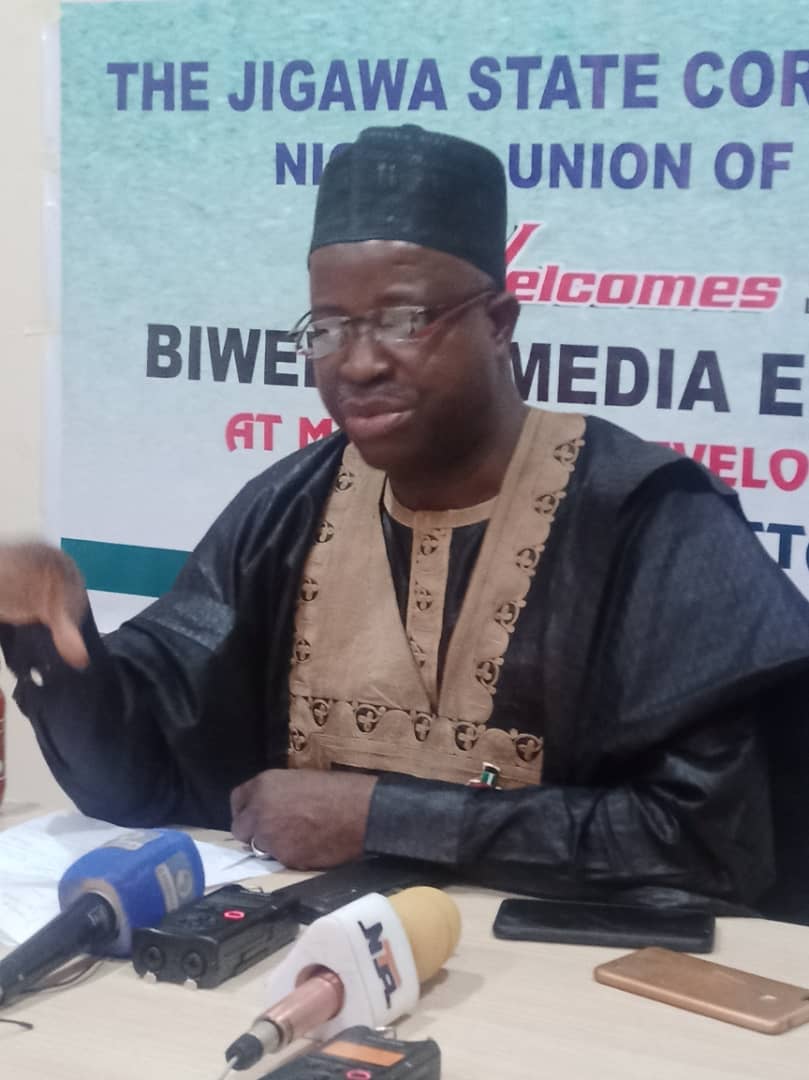 The All Progressive Congress Chairman (APC) chairman for Jigawa State chapter, Alhaji Aminu Sani Gumel has pleaded with Nigerians to reason with the Federal government on fuel subsidy removal as “The policy is not an APC initiative but fulfilment of IMF loans agreement since military era.

Gumel gave the indication while speaking to newsmen during a ” Media Engagement Forum ” organized by the Jigawa State Correspondents’ Chapel.
He said Nigerians should rather commend the party for signing the Petroleum Industry Act aimed at bringing prosperity to the nation ‘s economic sector”.

The chairman explained that there were several attempts by previous Governments to remove the subsidy but were resisted by Nigerians due to lack of confidence on their sincerity of purpose.

Gumel maintained that, based on the performance, confidence and trust Nigerians have in president Muhammad Buhari, “Iam optimist that, they will reason with the policy and give it the benefit of doubt” .

The chairman however declared that, his party has fulfilled all the promises made to Jigawa State people during 2015 and 2019 campaign adding therefore that there isno vacancy for a failed party like PDP in 2023.

He explained that, APC government has succeed in executing minimum of one project in each and every community across the 27 local Government areas of the state.

The chairman noted that, in the area of empowerment, the state government has empowered over 250,000 youths, women and other persons through their own jobs of choice for poverty eradication and wealth creation.

“However 160,000 less privileged persons are currently receiving N5,000 monthly under the federal government “Conditional Cash Transfer” while over 8,000 women have been engaged as cooks for the school feeding program that has benefited about 950,000 pupils in the State”.

He added that, in the area of infrastructure his party APC led government has built over 1,670km of roads to facilitate movement of goods and services for economic growth and social development.

In the area of Education he said in the last six years the Government of APC in the State has built and renovate over 5,000 classrooms, established over 250 new, primary, junior and senior secondary school to ensure access to education for all children in the state.

In the Health sector, the chairman indicated that since his assumption of office, Governor Badaru has been allocating funds to the Health sector above Abuja Declaration average.
this he said has enable the Government to establish over 200 functional hospitals across all political wards as well as the upgrade of about 10 hospitals to general hospitals.
He said it has also constructed three specialist hospital and one hospital.

“To ensure adequate manpower the Government had sponsored 200 students including one hundred females to study medicine in China and Sudan for accessible and affordable basic healthcare services to our people”.

“In the area of water supply, according to UNICEF report, Jigawa State has achieved over 90% provision of drinking water and we are second to Lagos state in Nigeria”.

The chairman maintained that, the APC government has transformed Jigawa State and made it a reference point in terms of good governance, Agricultural transformation, human development, peace and progress in Nigeria.

“Therefore it is a mirage and self deceit for any party like PDP to think of winning a single elective seat in Jigawa state during the forthcoming 2023 general election,” The chairman declared