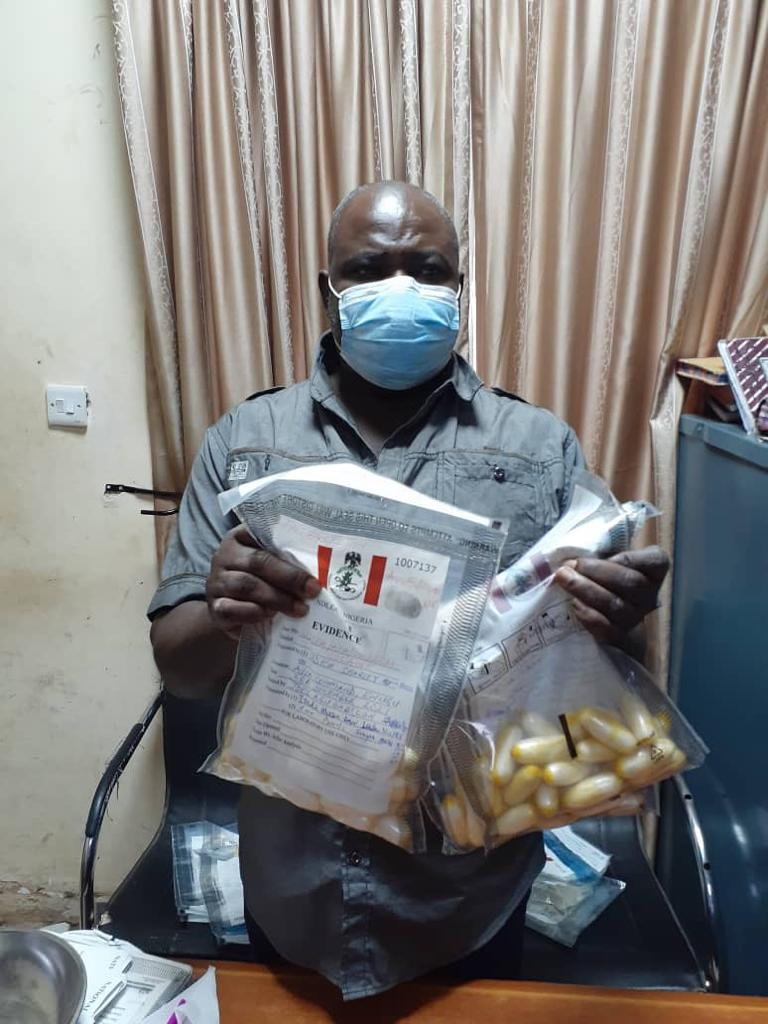 **Another 2 Nigeriens in Delta, 1million Tramadol capsules seized in Ondo, 453.673kg others in Anambra, Kogi_

The operatives National Drug law enforcement agency have arrested a Ghanaian and two Nigerians at the Nnamdi Azikiwe International Airport, Abuja and Akanu Ibiam international Airport, Enugu respectively for trafficking a total of 9.953kilograms of Cocaine and Methamphetamine.
A statement issued by the Director, Media and Advocacy Femi Babafemi indicated that one of the suspects, Uzoh Ndubuisi Johnson was arrested on Wednesday 8th December 2021 at about 5.30pm during an inward screening of Ethiopian Airlines passengers at the Arrival Hall of the airport.
Uzoh who arrived from Brazil via Addis Ababa, Ethiopia was controlled and arrested with clothes impregnated with cocaine, which has a gross weight of 6.7 kilograms.

While being interviewed by narcotic officers, Uzoh said he was given the consignment by his enabler based in Brazil for which he would be paid N3million upon successful delivery to someone in Nigeria.

In a similar event, another trafficker, 53-year-old Udeh Charley was arrested at the Enugu airport for ingesting 72 wraps of Cocaine weighing 1.253kilograms.
Babafemi said he was arrested on Friday 3rd Dec. during outward screening of Ethiopian Airlines passengers going to Rome, Italy via Addis Ababa.
In custody, he claimed he would have been paid 4000 Euros on successful delivery of the drugs in Italy where he has been living for over 20 years. He attributed his decision to engage in the ignominious trade on downward turn of his business as a result of COVID-19 pandemic.

In a related development, another trafficker, 25-year-old John Kadja, whose father is from Kumasi, Ashanti region of Ghana and mother from Nsukka, Enugu State was arrested on Friday 3rd Dec with 2 kilograms of Methamphetamine during an outward clearance of Qatar Airways from Abuja to Doha at the departure screening area of Nnamdi Azikiwe International Airport, Abuja. A search of his bag showed that the drug was concealed in a false bottom of his checked in luggage. He said he was travelling to Doha to work as a labourer.

In Ondo state, 43-year-old Onuoha Friday was arrested on Friday 10th Dec along Lagos-Benin expressway with one million capsules of Tramadol while in two major arrests in Anambra state, a total of 238.973kilograms of assorted illicit drugs were recovered.

On Friday 3rd Dec, NDLEA operatives intercepted a truck at the Onitsha head bridge heading to Delta State. Upon search, various quantities of Codeine, Tramadol, Diazepam, and Rohypnol were recovered from the vehicle and its driver, Obinna Obinwa, arrested. Similarly, on Wednesday, 8th Dec, the Agencys patrol team on Onitsha head bridge intercepted another truck going to Delta with different quantities of assorted illicit drugs while the driver, Lucky James, was also arrested.

In Delta, raids and follow up operations carried out in parts of the state on Friday 10th Dec led to the arrest of a 17-year-old Abdulkarim Shiabu and 23-year-old Lawal Saidu, both from Niger Republic and four others with different quantities of Cocaine, Heroin, Methamphetamine, Tramadol and Cannabis. Others arrested include: Precious Oghenegwoke; Loveth Omukoro; Uche Godwin and Uti Harrison.

In Kogi, Adam Salaudeen was arrested at Ogori Magongo area of the state with 214.7kg of Cannabis sativa.

Commending the officers and men of Enugu, Abuja airports commands and their counterparts in Ondo, Anambra and Kogi state for the arrests and seizures in the past week, Chairman/Chief Executive of NDLEA, Brig. Gen. Mohamed Buba Marwa (Retd) charged them and their compatriots across the country to remain vigilant and resolute in the collective mission to rid every part of Nigeria of illicit drugs.