Operatives of NDLEA rescue 34 children from traffickers in Kogi 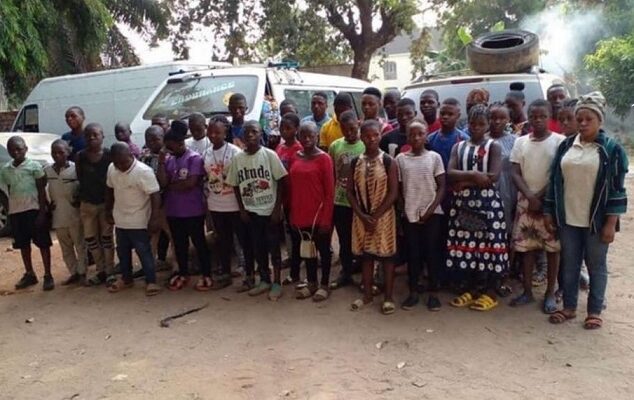 Operatives of the National Drug Law Enforcement Agency (NDLEA) have rescued 34 children along the Okene-Lokoja Expressway in Kogi State.
The image maker of the agency Femi Babafemi, confirmed this in a statement on Friday
He.disclosed that 64,000 pump action gun cartridges and a new pump action gun were also seized.

According to him the children between the ages of 8 and 14 were being trafficked from Ijebu-Ode in Ogun state to the Federal Capital Territory.

“The minors packed in two commercial buses – Toyota Sienna and a 12- seater Mazda with registration numbers Lagos LND124FV and Oyo BDJ-683YK respectively, were recovered in the early hours of Thursday, 16th December from the human trafficking syndicate.

“The bus drivers confirmed that the kids were handed over to them by a woman at Ijebu-Ode to be conveyed to Abuja, adding that on arrival in FCT, the woman is to call another bus driver who will convey the children to Riyom in Plateau State.

“Some of the children were discovered to have served for two years and their rewards sent to the woman’s agent in Jos,” Babafemi said.

He further disclosed that the gun and ammunition were seized at a store in Success Line at the Marine modern market in Onitsha in Awka North Local Government Area of the state.

On his part, the Chairman and Chief Executive of NDLEA, Brigadier-General Buba Marwa, commended the operatives for their vigilance and preparedness to work in synergy with other security agencies in their areas of responsibility