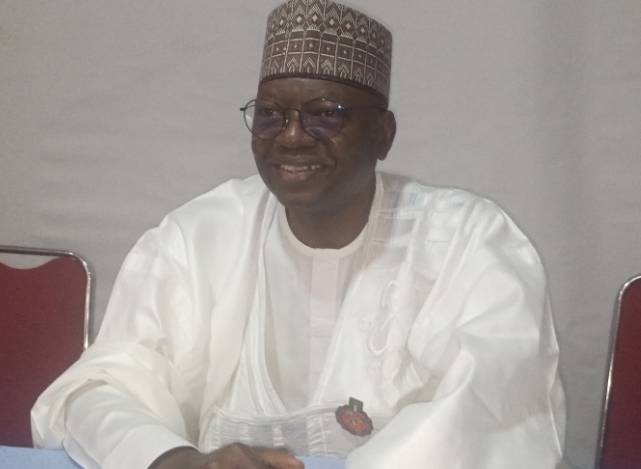 A frontline national chairmanship aspirant of the All Progressives Congress (APC) and Senator representing Niger East, Mohammed Sani Musa, has said if given opportunity to lead the party in the forthcoming national convention his leadership will re-engineer the political structure.

Musa, a serving Senator also warned Nigerians not to allow reversal of achievements of President Muhammadu Buhari since 2015, adding that those achievements have taken place because the President has faithfully implemented the manifesto and agenda of the party.

Speaking with newsmen Friday in Abuja, the Niger state born chairmanship aspirant commended the chairman and members of Caretaker Extraordinary Convention Planning Committee (CECPC) for what he described as “wonderful job” they have done in expanding the base of the party and attracting high profile members and their followers from areas where they previously had unsatisfactory electoral outcomes.

“It is for this reason that I am presenting myself as the candidate that can position our great party, the All Progressives Congress (APC), to achieve the electoral and political outcomes necessary to ensure that we consolidate and accelerate our socio-economic transformation.

“Leadership is an awesome and great responsibility that requires high sense of innovations and vision as a mechanism to changing our nation to more advancements. If repose with the responsibility to lead the party, I will endeavour to justify every day and in every act the trust that will be placed in me.

“Bringing a new beginning to our party leadership will create a new voice and direction to APC and by extension creating the best platform for an enduring leadership for our country for the good of all.

“If giving the opportunity to lead the party I will completely re-engineer the internal structures and workings of the party and make it adaptive to the yearnings and aspirations of members and Nigerians.

“I will be adaptive to participatory and affiliative work style that will usher visionary and pacesetting leadership that will transform the party to a democratic institution that Nigerians will proudly continue to embrace. If we hope to maintain credibility over time, then we must adhere faithfully to the same organizational expectations that our context asks of our teams, for me my words are my bonds.”

While calling on all the party stakeholders to join hands with him in re-engineering the internal structure of the ruling party, Senator Musa said: “Given my political clout, extensive experience and sphere of influence, I have no doubt that if given the opportunity, the APC will expand its sphere of influence beyond all fault lines and cover the length and breadth of our great country.”

Commenting on some of the challenges facing the party, the Senator said: “Having played a part in building our party at all levels since 2014, I am confident that I am the best candidate to lead the party to achieve our desired objectives. My ambition is borne out of my desire to contribute positively to the nation’s growing democratic process by ensuring that we build strong political structures with the required capacity to address the challenges we face as a party and ultimately as a nation.

“While there is no gainsaying the fact that our party, the All Progressives Congress, has endured its fair share of challenges especially in the areas of internal polarization and fair play, the process of rebuilding and repositioning the party requires visionary and just leadership.

Besides, the problems that have plagued us recently, and the problems that usually plague societies at any given time, have not been ones stemming from situations where leaders have made tough moral choices when faced with difficult, shades-of-gray options.

“Our problems recently have been that our party leaders have knowingly abandoned even the most basic morality when pursuing personal gain. Most moral leadership problems do not arise from misjudging complicated ethical issues. Most arise from something much simpler: wanton disregard of common decency in pursuit of naked self-interest.”
[12/10, 17:37] BlueprintBode: Convention 2022: APC groups back Dada Olusegun for national youth leadership position

Ahead of the All Progressive Congress (APC) national convention in 2022, some progressive youth groups have thrown their weight behind Comrade Dada Olusegun to contest for the National Youth Leader of the party citing his political acumen and widespread influence over the years.

In separate declaration of support, Friday, a group known as ‘Kano for Dada’, via the spokesperson Ismail Adam, said their decision to wholeheartedly support Olusegun Dada for the national youth leader was based on his wealth of experience in politics, and his acceptability amidst the APC youth groups

“Dada Olusegun is blessed with an uncommon energy and zeal; committed to whatever he does. He rarely carries the demeanor of a tired person, you cannot overlook his relentless effort towards achieving goals in all his political endeavor.”

The National President of the vanguard, Haruna Kabir Alfa, said “Segun Dada is a committed party loyalist with requisite exposure to lead the youth wing of our great party, the All Progressives Congress.

“We have no doubt in our minds that Segun will take the party particularly the Youth wing to greater height. He has paid his dues as a devoted party man. He is a Youth development expert.”

In the same vein, the Progressive Clan in its statement emphasized that “Dada Olusegun is an hero and dogged fighter for the youths of the All Progressive congress.”

In a four paragraph strong worded letter, the spokesperson of the group, Tobi Matthew, said Dada Olusegun’s years of activism and partisan politics are glitter, full of praises with applauding and distinctive record.

“Dada’s passion and words are oxygen, through that, many people find reason to live and hope for better days. His continuous preaching of a better party administration to accommodate youth interest comes with a re-igniting flame that must keep burning for sustainability of our great party and its tenets.

“As a freedom fighter from, Dada Olusegun name and physicality scares the oppressors and pharaoh of ages. Aside his persistence and can-do-spirit, he is, to put it concisely: the textbook example of hardwork and tenacity. A workaholic.

“He’s intellectually stimulating and has the gift of the gab. He wows his audience with his inspiring, lively and insightful presentation.”

Matthew submitted that these attributes are critical for anyone who will emerge as National youth leader and as it stands, the leadership cap fit Dada’s head properly.

Also, the convener of Team Segun Dada group, Genshak Golak insisted that Olusegun Dada is one of the intelligent individuals whose through his activism has made impact on the life of many to achieve their desired goals right from his undergraduate days

In his words; “All Progressive Congress Youth desires a meritorious, vibrant and more energetic youth to be their leader and the best decision is Dada Olusegun

“In our interest collectively as APC youths yearning for youth inclusion and participation, massive mobilization, great administration and progress in our dear party, we consider it significant to give our full support to Olusegun Dada as he possess a diverse experience and has been nominated and appointed for different offices and quest; his name, capacity has therefore recorded many success.

”We call on Dada Segun to heed to this request to contest; as we urge all youths as well as party stakeholders to rally behind our candidate”

The All Progressives Congress, APC, had earlier announced in November that its national convention will take place in February 2022.