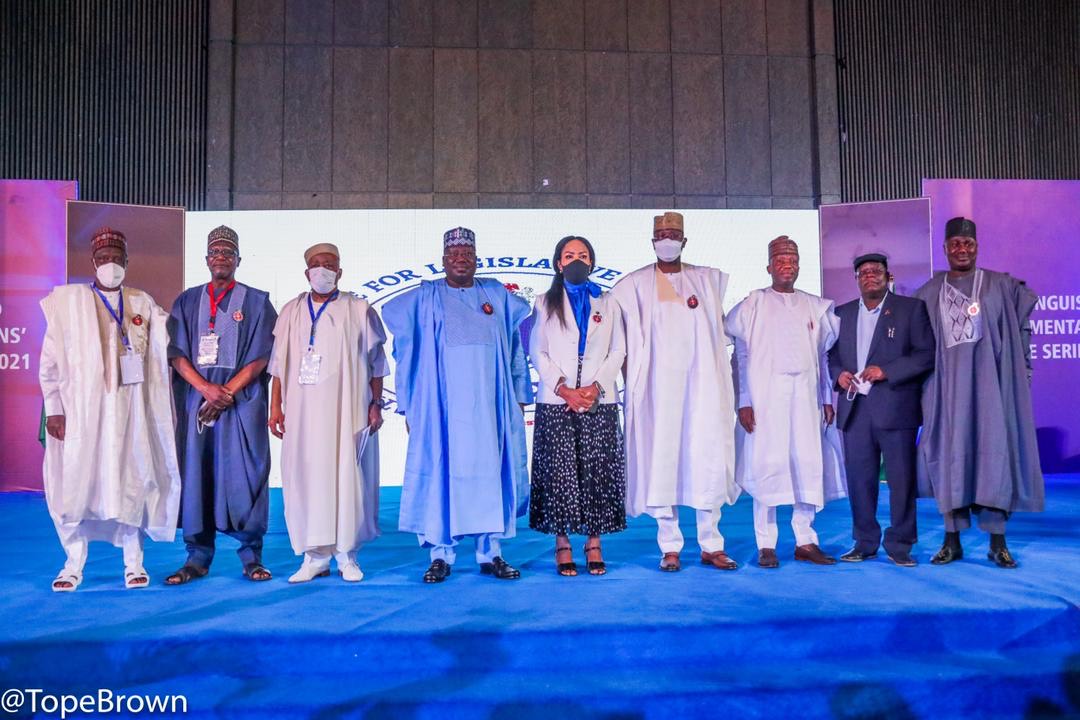 ***clears some misconceptions of the public about NASS

The President of the Senate, Ahmad Lawan on Monday tried to clear some common misconceptions about the legislature that has become entrenched and difficult to change in Nigeria.

After many years of confusion and figure fixings, Lawan on Monday revealed salaries and emoluments of Federal lawmakers to the public in Abuja

This was as he declared that President Muhammadu Buhari has done better than his predecessors on assents Bills.

Speaking in a paper presented at the First Distinguished Parliamentarians Lecture Series organised by the National Institute for Legislative and Democratic Studies ( NILDS), the President of the Senate said monthly Salary of a Senator is N1.5million while that of a member of House of Representatives is N1.3million.

He said the N13 million thrown into the public space few years back as monthly salary of a Senator was quarterly office running allowance.
“The quarterly office running allowance for legislators Is what Is erroneously conflated with a monthly income to create confusion and mislead the Nigerian people.”
According to him, the average office running cost for a Senator is about N13 million while that of a member of the House of Representatives is N8 million.
This he said is to cover the cost of local/international travel and transport, consulting of professional service, medical services, office stationaries/computer consumables, books, newspapers,’ magazines and periodicals, maintenance of motor vehicles and office equipment and constituency outreach, among others.
“
Arithmetically , N13million office running cost for a Senator amounts to N52million a year while the N8million for a member of the House of Representatives , amounts to N32million in a year.
Another issue that has contributed to abiding poor perception of the National Assembly he said is that of salaries and emoluments of legislators which he said are approved by the Revenue Mobilisation, Allocation and Fiscal Commission (RMAFC).
He said it is included in the budget allocated to the National Assembly,
“This is one of the lowest of any presidential democracy in the world.”

“It is well known that the budget of the National Assembly, which has never risen above N150 billion since 1999 is a fraction of the budget of the federal government, much less than the budget of some ministries in the executive.”
According to him, the aggregate budgets approved for NASS from 2005 to 2021 and the relative shares in the national budget trended upwards from N54.8 billion in 2006, except in 2009, peaking at N154.369 billion in 2010. “Thereafter, it stabilized at N150.0 billion each year. In 2015/2016 and 2019 however, the aggregate allocation to the National Assembly dropped to N120 billion and N115 billion respectively.
“In relative terms, the budget allocation to the National Assembly declined from 4.1 per cent of the total federal budget in 2008 to 1.90 per cent in the 2016 fiscal year.
“However, in the last four years, the percentage of the National Assembly budget in the federal budget ranged between 0.82 (2021) to 1.44 (2019) per cent of the Federal Government budget.

On constituency projects and zonal intervention projects have generated a lot of controversies. “Regrettably, a lot of what has been said is based on a limited understanding of how these projects work. It is a system that allows legislators to nominate projects for implementation in their respective constituencies. “Legislators themselves do not implement these projects. However, in line with their legislative mandate, they exercise oversight over the process.
“I am the first to agree that we need a sustainable framework for the management of these projects after completion.
“This should include formal handing over to the States or Local Governments for maintenance.”
He said the purchase of Operational Vehicles for use of legislators has also received extensive media attention.
” The argument against the purchase of official vehicles for legislators is at best counterintuitive and at worse malicious and intended to tum the public against lawmakers. If civil servants from the rank of assistant director and above are entitled to official vehicles and

“Some ministers have a convoy of cars, why is the allocation of a Toyota Camry to Members and a land cruiser such a hideous proposition.”

He said the current National Assembly is the most successful in law making since the return to civil rule in 1999.

The Senate President said the focus of the ninth National Assembly had been on legislations that are most likely to impact either on the democratic Institutions, economy, security or the livelihood of Nigerians.

“I dare say that the ninth Assembly has been the most successful in the area of lawmaking since 1999.
“We have broken many ‘jinxes’ and done many ‘firsts,’ overcoming traditional obstacles through consensus building and clever political brinkmanship,” Lawan said.
The Senate President said as of November 2021, about 2,500 Bills had been introduced in the National Assembly – 769 in the Senate and 1,634 in the House of Representatives.
“However, as I have repeatedly maintained, for us in the 9th Assembly it is not so much the number of bills as it is quality.
“We have focused our energy working on legislations that have a realistic chance of being assented to as well as those that have the potential to impact most on the lives of Nigerians,” Lawan said.
He said President Muhammadu Buhari led-APC had been the most proficient in granting assent to Bills stressing that available data on gazetted Acts showed that between 2015 and 2021, President Buhari had assented to more than 84 Bills, the highest since 1999.

The Senate President said the projection was that the figure would be significantly higher before the end of Buhari tenure in 2023.
From the available data displayed by the Senate President, President Olusegun Obasanjo signed a total of 82 billed into law between 1999 and 2006, President Umaru Yar’Adua signed 38 bills into law between 2007 and 2009 while President Goodluck Jonathan signed 40 bills into law between 2010 and 2915.
“For twenty years, the National Assembly had attempted reforming the petroleum industry without much success.
“It was first introduced in the 6th Assembly (2007-2011) but failed to scale through. Similar efforts by the 7th Assembly failed to secure concurrence by the Senate while in the 8th Assembly, the Bill was passed but failed to secure presidential assent.

“In the 9th Assembly, we prioritised the Bill in our legislative agenda and worked closely with the Executive to secure passage and assent.
“This historic achievement of the National Assembly means that Nigeria now has legal, governance, regulatory and fiscal frameworks for the petroleum industry that would promote optimal utilisation of the country’s abundant oil and gas resources.

“It will also enhance social and economic development and promote a conducive investment climate in the industry and foster the development of host communities.