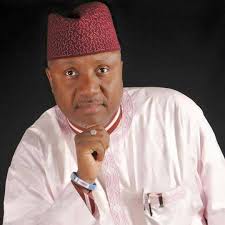 The thousands of party supporters which include Senator Bindow’s former commissioners, former aides, party loyalists as well as APC elders met to discuss the need to bring back Senator Bindow to save the state.

Speaking during the meeting, a former commissioner of education during Bindow’s administration, Hon Julius Kadala, said the best candidate for APC in Adamawa for the next gubernatorial election is Senator Umar Jibrilla Bindow, because he has done so much for the state in his last tenure and the people want him back.

Kadala further described rumours of Bindow’s defection to the People’s Democratic Party (PDP) as the work of mischief makers and a plan by some elements in the opposition to leverage on Bindow’s popularity to gain the peoples’ trust and support.

“Bindow has never and I repeat never contemplated leaving the APC for PDP or any party, these rumours are lies and falsehood by mischief makers. Most of us here know that Senator Bindow is a hundred percent loyal party man and he has contributed immensely to the success of the party at state and national level”, he added.

On his part, the former commissioner of finance, Alhaji Mahmud Sali said, it is clear to the good people of Adamawa state that no governor has matched the good work of Bindow in the state. Stating that, the present PDP government is yet to deliver half of what Bindow did in his first year in office.

He then urged the thousands of cheering supporters to remain calm and continue to work for the success and progressive of the APC in the state as the party as Bindow will return to continue the good work.

Also speaking during the meeting, another former commissioner during Bindow’s administration, Isa Barima stressed the need for the APC at both state and national levels to produce Senator Bindow as a consensus candidate for the 2023 gubernatorial elections as it is the strongest recipe for success and victory.