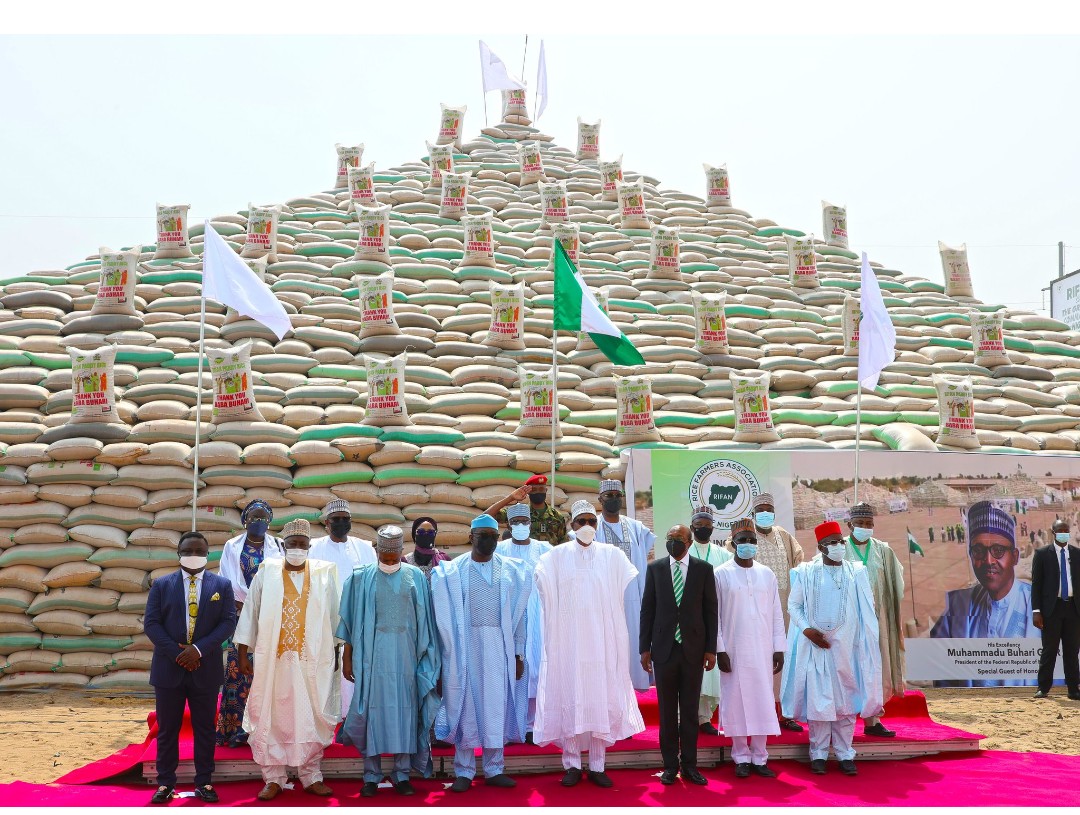 Not fewer than 106 Coalition of Civil Society Group, CSOs have commended President Muhammadu Buhari and the Governor of Central Bank of Nigeria, (CBN), Godwin Emefiele over the launched of the largest rice pyramids in Abuja yesterday.

In a press statement jointly signed by the President, Coalition of Civil Society Groups, Bassey Etuk Williams and 36 other state coordinators in Abuja, he explained that the program has shown that President Buhari agenda on food security is yielding required results.

Williams noted that the rice sufficiency goal was achieved effectively due to the CBN Governor, Godwin Emefiele that introduced Anchor Borrowers Programme, ABP initiative, aimed to actualize the food security and sufficiency agenda of Mr. President.

According to him, the ABP initiative of the CBN has no doubt yielded expected outcome and an encouragement for diversification agenda of Nigeria’s economy from oil.

He reiterated that the ABP Initiative has help in increasing bank finance to agricultural sector, enhanced capacity utilization of Agricultural firms involved in production and as well improve the well-being of the farmers.

‘’The recently unveiled largest rice pyramid by President Buhari shows that Mr. President agenda on food security is yielding required fruits. The rice pyramid would not have been possible if not for the initiative of the CBN Governor, Godwin Emefiele that introduced Anchor Borrowers Programme to actualize the food security and sufficiency agenda of Mr. President.

‘’This is evidently shown in the largest rice pyramid, amidst insecurity in the land, the farmers were still able to utilize the finance to farm. The Anchor Borrower’s programme of CBN has no doubt yielded expected outcome as we can now talk about diversification of our economy from oil but now Agriculture as the country will soon be on the map of rice exporters to other countries by earning foreign earnings. This rice pyramid reminds us of the the groundnut pyramid we used to have in the North.

‘’There is thus a need to celebrate President Buhari and Godwin Emefiele for food security and self-sufficiency in rice. The advent of Anchor Borrowers has been able to assist small scale farmers to increase production and supply of feedstock to agro- processors. It’s a loan without collateral to farmers being supervised by CBN, and here we are with the resultant outcome of the input.

‘’Farmers and especially rice farmers have recounted their gains following the output and major achievement of the Anchor Borrower’s Programme of CBN. The programme has increased bank finance to the agricultural sector, and has enhanced capacity utilization of Agricultural firms involved in production and as well as improved the well-being of the farmers.

The CSOs President, stated that Emefiele has no doubt changed and transformed the agricultural sector with the results of the various intervention programs in the sector, adding that increase in banks credit growth was driven solely by policy of deposit ratio introduced by CBN Governor.

He stressed that more than five hundred thousand beneficiaries have benefited from the anchor borrowers programme of the CBN, noting that the intervention also spans around youth investment funds, real sector and health sector.

Williams lauded the Rice Farmers Association of Nigeria, RIFAN statement on possible reduction in price of rice after the unveiling of the rice pyramid, and also reiterating the agreement with the millers to sell at discounted price for Nigerians.

He assured continuous support to the good initiative of President Buhari and intervention of the CBN Governor.

He urged the President for more laudable programs to further take the Nigerians away from poverty.