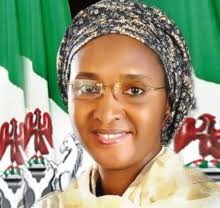 The Federal Government has soft-pedal on its initial plan to remove subsidy on petroleum products saying it is clear to even the blind and audible to the deaf that the situation of the country does not allow for that at the moment
Recall that while presenting the 2022 budget the Federal Government had infused in the budget provision for subsidy untill June 2022 when it wanted to remove the subsidy which was passed and assented to.
In seeking for a soft landing based on the outcry from Nigerians the minister of Petroleum Resources Timipre Sylva and his counterpart in the ministry of Finance Hajia Zainab Ahmad as well as the Group managing Director NNPC limited, Mele Kyari met with the national assembly leadership to seek an ammendment of the law to provide for an extension of subsidy provision beyond June 2022
The Minister of Finance, Budget and Economic Planning, Hajia Zainab Ahmed, said that the Federal Government had postponed the planned removal of subsidy on petroleum products till further notice.

The meeting was convened at the instance of the President of the Senate, Ahmad Lawan.

The Finance Minister said the Federal Government initially had the plans to remove subsidy on petroleum products from July this year.

She said that was the reason adequate provision was made in the 2022 national budget for subsidy payment till June.

She said, “Provision was made in the 2022 budget for subsidy payment from January till June. That suggested that from July, there would be no subsidy.

”The provision was made sequel to the passage of the Petroleum Industry Act which indicated that all petroleum products would be deregulated.

“Sequel to the passage of the PIA, we went back to amend the fiscal framework to incorporate the subsidy removal.

“However, after the budget was passed, we had consultations with a number of stakeholders and it became clear that the timing was problematic.

“We discovered that practically, there is still heightened inflation and that the removal of subsidy would further worsen the situation and impose more difficulties on the citizenry.

“Mr. President (Muhammadu Buhari), does not want to do that. What we are now doing is to continue with the ongoing discussions and consultations in terms of putting in place a number of measures.

“One of these include the roll out of the refining capacities of the existing refineries and the new ones which would reduce amount of products that would be imported into the country.

The minister for state petroleum Resources Timipre Sulva said
“As far as I am concerned at this point it is a legislative duty.
“The law has been passed we are all aware but there is no law that is cast in stone. “It is clear to everyone that at this point in operationalizing the law is not possible within 6minths framework that has been provided for in the law and if that time frame provided for in the law is not feasible which has come to us as a result of operationalising the law then it is also a legislative responsibility now to see what can be done in extending that time frame for it to be in the purview of the law,  “Secondly the other legislative issue arising from it is the provision for the subsidy that is not there after June.
It is very clear to the blind and audible to the deaf that it is not feasible at this time to remove subsidy.
“I know that some nay sayers, or political pundits want to bring politics into it but it is not within the contemplation of this administration now to remove subsidy.”

The president of the Senate Ahmad Lawan said the meeting ordinarily shouldn’t have been opened for media coverage however he indicated that anything that will interest the public is worth coverage
The Senate President therefore urged the organised labour unions in the country to shelve their proposed nationwide protests as it was no longer necessary.

“There is need at one point to do away with subsidy but the President genuinely feel for Nigerians particularly the most vulnerable. Even though our economy is growing but we still have challenge getting better.
“Because of this feeling by the President and most of us in this administration believe that the issue of removal of subsidy should be handled with utmost care especially that sufficient planning needs to be done.
“Significant arrangement for absorbing the shock that will come with the removal should be done and the timing is such that the impacts and consequences will not add to hardships.

He said the sympathy for Nigerians is not about NLC.
“We are talking about every Nigerian.  NLC is just an organised part of the system. Our concern is beyond NLC.
“I am taking this opportunity to speak to TUC and NLC to shelve this their plan to go on strike or demonstration.  “It is totally unnecessary.  There is not going to be removal of subsidy so let us not create unnecessary tension where there should be none.
“Please forget about the 27th of January deadline.  We are supposed to come together and work assiduously to see that our country is stable that our people enjoy the benefits of Government programs and projects. “At the end of the day whatever decision we would be taking would be in the best interest of our people.”