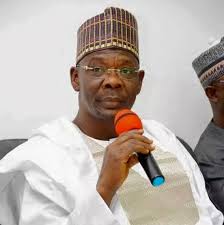 Governor Abdullahi Sule’s proactive measures on security related issues in the state is yielding positive results Senior Special Assistant to the governor on security, Mr. Moses Utondu gas indicated.
Speaking in an exclusive interview with the Nationalupdate in Lafia on Monday.Mr. Utondu indicated that governor does not play politics around security because he is looking for result owing to private sector background

“When Sule came on board he identified the major security challenges which included herders/farmers clashes, invasion by the boko haram sect in places like Toto, and banditry in some local governments in the state.

“As I speak today we have dislodged boko haram group in the state through the joint operation of the military and we have put bandits activities in a serious check.

“If you wait until conflict degenerates it will become difficult to manage, therefore a proactive and prompt approach must be taken, this is the basis on which the governor is operating

“Besides being non political on security related issues, Governor Sule is using the community based security approach.

“We do not take the issue of rumor for granted. Any security breach that can ignite conflict is easily quenched using the conflict resolution apparatuses who are the community leaders”, Utondu said.

Utondu however noted that quick response principle to security matters at the start up in some of the flash points in the state is the reason why the Sule administration is winning the war against insecurity in the state.

He stated that synergy between security agents and the community leaders has also helped in taking proactive measures against security breakdown.

According to Utondu, where any conflict cannot be handled by the community leaders security operatives can now come in.

Utondu also identified the locals as being vital in information gathering technique that helps in taking proactive measures.

He noted that the community security approach supports locals who are trained to divulge vital information regarding possible breakdown of law and order among in the local communities.

The SSA further noted that traditional rulers are key to ensuring a secured community because they have good knowledge of the people they are leading.

He opined that strange faces and notorious persons in any community can easily be identified and expunged by traditional leaders.

He revealed however that the state government is working hand in hand with all traditional rulers and community leaders across the state.

He appealed to residents in the state to report any suspicious persons to security agents or their community leaders, noting that security is the responsibility of every citizen.

He however assured that the governor will not rest until security of every person in the community to guaranteed as well as the safety of the investments and investors in the state.