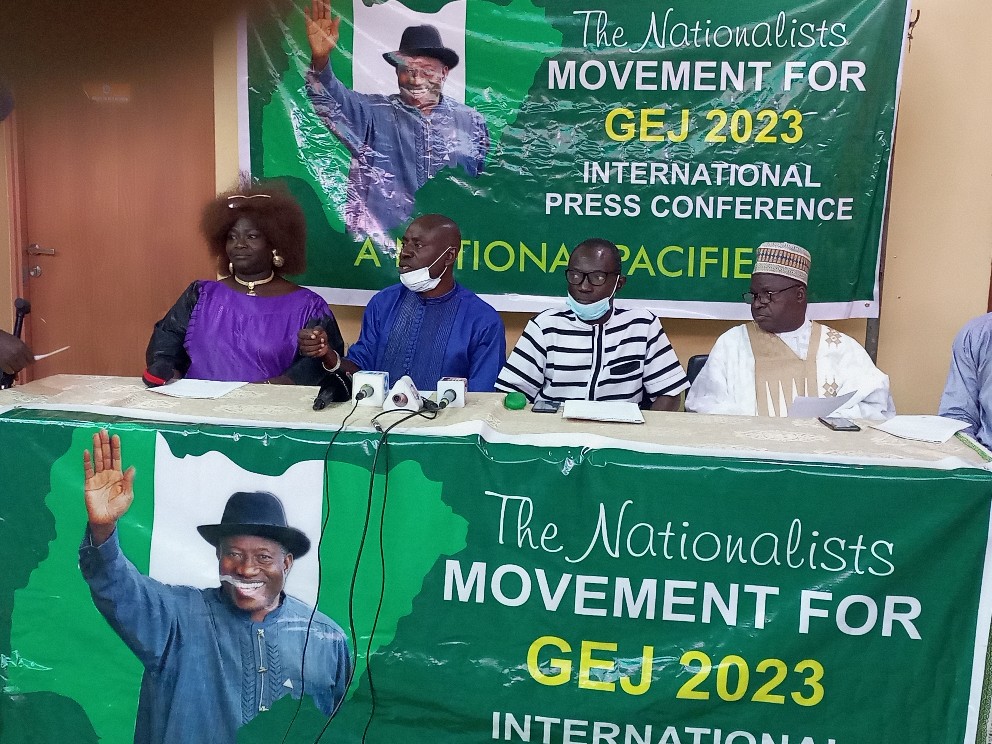 The Nationalist movement for GEJ 2023 has advanced a dozen and one reason why only former President Goodluck Jonathan holds the magic wand to salvage Nigeria from sinking down the drain.
The national Coordinator of the group engineer Abidde Robinson while addressing a world Press Conference at the NUJ press Center, Utako Abuja on Thursday said Nigeria at the moment needs a leader that can bridge the gap created by Ethnic, religious and regional jingoist who have succeeded in dividing the country across those fault lines.
“Nigeria and Nigerians now needs a popular leader like H. E. Dr. Goodluck Ebele Jonathan with a track record of integrity and statesmanship to bridge the north-south alliance in 2023.
They recalled his popular saying that his political ambition is not worth the blood of any Nigerian saying he was a leader who encourages dialogue in conflict management rather than force.
This they he demonstrated by conceding defeat even before results were announced and went further to call his opponent on phone to congratulate him.
By so doing he allowed for a peaceful transition of power without going to tribunal as against the usual attitude of most Nigerian leaders.
“He preaches and practices the politics of “give and take” and not winner takes it all.
He ran an all inclusive government that gave every part of the country a sense of belonging in terms of policies and appointments.
“He speaks and acts for national interest, not sectional or parochial interest.
“Under him, every ones vote counted.”
They described him as is a democrat who builds, entrenches and deepens strong democratic culture and institutions, not strong personalities.
“He is well known for his civil approach in tackling national issues to ensure the rule of law, social justice and equity are promoted and protected.
“He is a very good manager of our economy. Under him, Nigeria’s economy was number one in Africa and the fastest growing economy in the world.”
To this end they said the Nigerian national unity, peace and security can be preserved now than before by his humane approach to issues
“He is a unifying force to keep the country one. He is trusted, dependable and the most accepted politician across board in contemporary Nigeria”
“It is in view of the above that majority of patriotic and nationalistic Nigerians and friends of Nigeria from all works of life are pleading with H.E. Dr. Goodluck Ebele Jonathan to accept this critical national service once again.
The group therefore said they are joining their voice to the many voices calling on the former President to throw his heart in the ring to contest the 2023 Presidential election