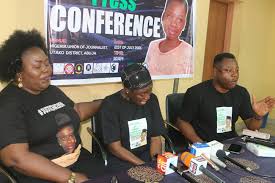 The Human Rights Writers Association (HURIWA) is dismayed at the curious and inexplicable apparent discomfort of the Abuja Based educational institution known as Premiere Academy, Lugbe, Abuja with efforts of the mother of their student the late 14 year old Keren-Happuch Aondoodo Akpagher, Mrs Vivien Vihimga Akpagher and the Coalition of Gender Based Violence Responders (CGBVR) led by Lemmy Ughegbe to seek that the killer-rapist is fished out and brought to justice.

If the school has nothing to hide, it should have joined forces with Mrs Akpagher and the – Ughegbe led coalition.

HURIWA appeals to the Inspector General of Police Usman Alkali Baba to do all he can in his capacity as a man that loves the rule of law and safety of the citizenry, to ensure that the alleged threats against Activist Lemmy Ughegbe is not allowed to materialize.

We are aware through newspaper reports that Premiere Academy sued Ughegbe for alleged defamation of its character because he spoke at the 2021 Law Week of the Nigeria Bar Association, Abuja Branch, where he charged lawyers to join the coalition to seek justice for Keren.

We in HURIWA are expressing shock and asking ourselves why the well respected school should be upset or feel defamed because Ughegbe is seeking justice for the rape victim and closure for her family? Ordinarily, HURIWA expects that Premiere Academy should commend Ughegbe rather than allegedly seek to harass, intimidate, bully and threaten him by various means including allegedly using the police.

We understand that Premiere Academy allegedly filed a complaint of “Defamation and Provocation by Lemmy Ughegbe and Mrs. Vivien Akpagher” and on the strength of that he was invited by the State C.I.D. and he was there on Monday, 17th of January, 2022 to honour the invitation despite his concern that the school was using the State CID to bully him. Rather than Premiere Academy owning up to the complaint they filed, which led to Ughegbe being invited, they feigned ignorance about it and called him a cheap blackmailer, claiming they were also invited. The fact that the school is not forthcoming about who instigated invitation of the human rights activist Mr. Lemmy Ughegbe is another cause for worry.

The substratum of the school’s prayer to the police is that they (the police) allegedly order Ughegbe and the mother of late Keren-Happuch, Mrs. Akphagher stay action from seeking justice for Keren, alleging that they have defamed the school’s reputation in several publications.