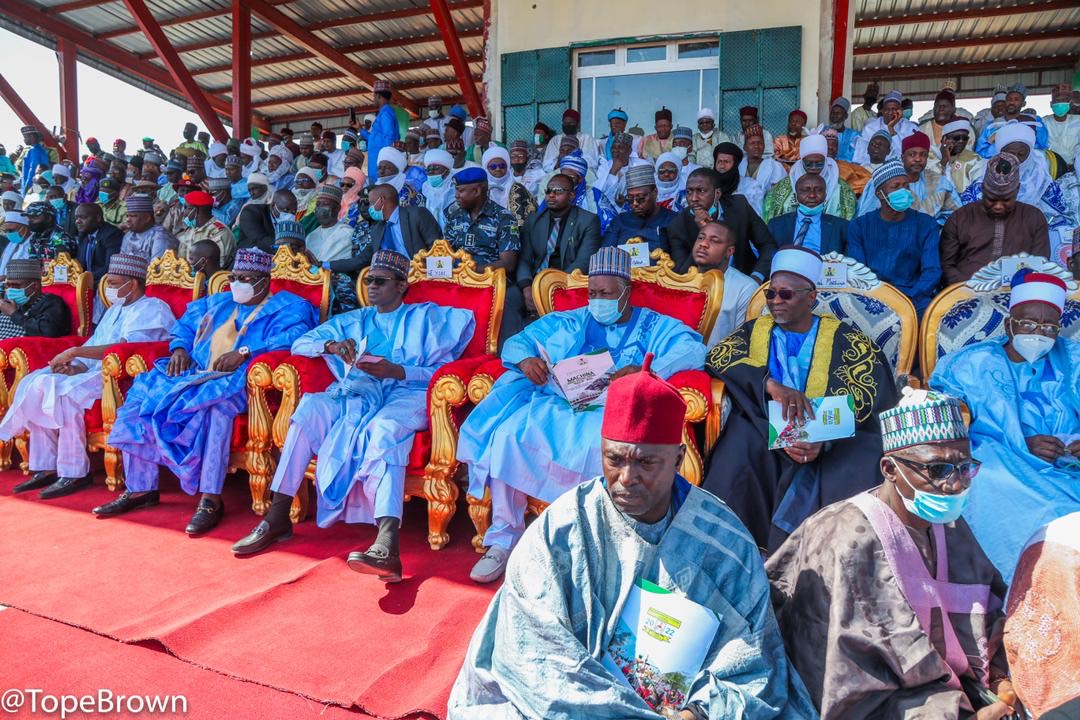 President of the Senate Ahmad Lawan, the Governor’s of Yobe state Mai Mala Buni, Jigawa State Alhaji Mohammed Badaru Abubakar and Kebbi State, Senator Abubakar Atiku Bagudu have received chieftaincy titles of the Machina kingdom.
They were honoured at the 2022 Annual Machina Cultural Festival which started on Monday and ended on Sunday.
The special adviser on media to the Senate President Ola Awoniyi in a statement said the three Governors were all honoured with chieftaincy titles by the chief host, the Emir of Machina, HRH Alhaji Dr. Bashir Albishir Bukar Machinama.
According to the statement the Machina Paramount ruler gave Lawan letter of appointment as the Danmasani Machina.

The week long activities which became an annual event in 2006 were rounded off on Sunday with grand Durban which was a beautiful display of horsemanship and led by the Machina Paramount ruler himself, HRH Alhaji Dr. Bashir Albishir Bukar.

The colourful event was also witnessed by the Shehu of Borno, HRH. Alhaji Abubakar Umar Garbai Ibn Al – Kanemi.
Buni at the event praised President Muhammadu Buhari for his untiring efforts at restoring peace and normalcy particularly to the troubled north eastern part of the country.

Buni acknowledged that there is now a significant improvement in the security situation in the Northeast particularly in Yobe State.

The Yobe Governor also commended the Senate President, Ahmad Lawan for providing the right leadership at the National Assembly and for providing the much needed support and cooperation to enable the executive arm of government perform.

Buni said the large and peaceful congregation that witnessed the cultural festival was an evidence that the security situation had improved.

He thanked President Muhammadu Buhari for providing the security personnel the required resources to secure lives and property in the country.

“As a result of this, the people in the north eastern part of the country can now sleep with their two eyes closed.

“In case there is still anybody in doubt, this large congregation at this event is enough proof that the security situation has improved,” Buni said.

Buni also thanked the traditional rulers, other community leaders and Imams for their prayers which, from evidence, had been answered by God.

The Yobe governor also made glowing remarks about the Senate President for leading a legislative arm which provided cooperation and support needed for the executive arm to deliver on its mandate to the people.

Buni said the various projects that the government had executed or are now being implemented were the results of the cooperation and support which once eluded the Buhari’s administration the first four years but are now being provided by the current Assembly.

“He was voted here as a Senator because this is his constituency. But God has made him Senate President of the Federal Republic of Nigeria

“Since he assumed office as Senate President, the support and cooperation that he gives the executive arm of government led by President Muhammadu Buhari has brought about the development in the country that we are witnessing today.

“This is why we are seeing projects of national and rural development and the likes and these projects will get to you here very soon,” Buni said.