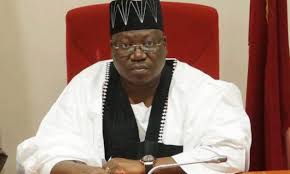 The President of the Senate, Ahmad Lawan, has expressed sympathy with the victims of the fire outbreak at the Central Market in Nguru, Yobe State.
An early morning fire, on Saturday, gutted the Nguru Central Market in Yobe State, destroying several shops and stalls.

In a Ststement by his media adviser Ola Awoniyi he commiserated with those whose shops, stalls and warehouses got burnt or lost materials in the unfortunate incident which occurred on Saturday morning.

“I commiserate with the people of Nguru and in particular those who are directly affected by the fire outbreak at the main market.

“We will also make other interventions at our personal level to assuage the plights of all those who are affected,” Lawan says.

The Senate President callef on the relevant authourities to investigate the cause of the incident with a view to preventing a recurrence.