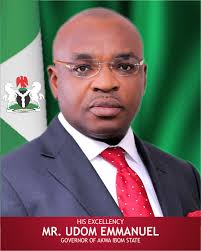 The President of the Senate, Ahmad Lawan has in a tacit manner wooed  the Governor of Akwa Ibom State, Udom Emmanuel to dump his party the People’s Democratic Party (APC) and join the ruling party, the All Progressives Congress (APC)
A statement by his special adviser on media Ola Awoniyi said
Lawan was in Uyo on invitation by his colleague, Senator Bassey Albert Akpan where he showered encomiums on the Governor for good performance as he publicly asked him to jump the boat.
The statement said Lawan is of the ruling All Progressive Congress(APC) while Emmanuel is of the opposition Peoples Democratic Party(PDP) but the duo have been friends for quite sometime.

Recall that Lawan extended similar invitation to the Abia State Governor Okezie Victor Ikpeazu when he visited Aba last November and also told him  that the Progressives were waiting for him.

Both the Senate President and Akwa Ibom State Governor were among dignitaries at the Thanksgiving Service and Commissioning of constituency projects executed by Senator Akpan on Saturday.
Lawan used the opportunity to congratulate the people of Akwa Ibom for being lucky to have Udom Emmanuel as their Governor.

“You have a Governor who is so focused, intelligent, brilliant and anything that will bring development to Akwa Ibom and this country is his concern.

“Your Excellency, even though we do not share a common platform but the truth must be said: You have transformed Akwa Ibom for the best.

“We are waiting for you to come and work with us Your Excellency. Oh yes! Why not? We want someone like you. And there is no shame in asking.

“We are asking for the development, unity, progress and growth of our country. It doesn’t matter who that person is.

The projects that were commissioned on Saturday include Ifa Ikot Akpan road, Uyo and Senator OBA Multipurpose Recreational Complex in Uyo.

The Senate President said the projects were indicative of Senator Akpan’s care for his people.

“For us as members of the National Assembly, it’s always our people first. Our constituents first. Our Senatorial District first.

The Senate President said Senator Akpan who is of the People’s Democratic Party( PDP) never allowed his political affiliation to affect his patriotic contributions at the Senate.

“We believe that this Ninth National Assembly particularly the Senate has done so much work in terms of legislative interventions and for your information Your Excellency, when the Senate worked on the bill to amend the Deep Offshore and Inland Basin Production Sharing Contract Act, that bill was by Distinguished Senator Bassey Albert Akpan.

“You have sent someone to the National Assembly who is focused, who is patriotic, who plays the game of ensuring that regardless of who we are as politicians, regardless of our dispositions politically, regardless of our political parties, we have been working with Distinguished Senator Bassey Albert Akpan very assiduously and cooperatively. In this Senator, you have a salvation of some of your promises,” Lawan said