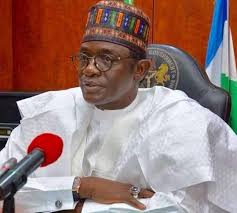 The President of the Senate, Ahmad Lawan has lauded the Governor of Yobe State, Mai Mala Buni over his efforts at revitalizing the education sector in the state.
Lawan spoke in Abuja while receiving in audience on Tuesday members of the Yobe State Education Appeal Fund Organising Committee led by former Head of Service of the Federation, Alhaji Bukar Goni Aji.

His Special adviser on media Ola Awoniyi in a statement quoted

Lawan to have told his guests that since Governor Buni took office in 2019, “the trajectory of educational development has improved tremendously and this is something that we have to sustain and do even better.

“I believe setting up this Committee to come up with ways and means of getting more resources for the education sector in Yobe State is the right decision and as citizen, we pledge our total commitment and support for this cause.”

According to him the immediate past administration of Governor Ibrahim Geidam “tried it’s best in terms of development of not only infrastructure but education in the state.

“And of course, because Yobe State is one of those states that don’t get much from the statutory allocation, normally, it won’t be enough for either education or infrastructure and so on.

“Therefore, the immediate effort of the administration of Governor Mai Mala Buni to have a needs assessment of education in the state especially primary and basic education was a step in the right direction on the need to understand the huge and massive challenges that the state faces when it comes to development of education.

“Therefore it is absolutely necessary for government and indigenes of Yobe State, our friends, our well wishers and our development partners to look into the possibility of coming up with additional means of funding education in the state in order to sustain the trajectory of educational development in our state.

“Therefore, I am pleased to receive you today and I want to assure you that this is one thing that is very close to my heart. I believe in education. We do some interventions in our little way just to support especially students who are indigenes of the state.

“So we will continue to do whatever is possible for us within the time limit that we have representing our people, in helping the education system in our state as a public intervention but also contribute in whatever way possible we can in our private capacity in helping our state to achieve the most desired educational development.”

Earlier, the leader of the delegation, Alhaji Bukar Goni Aji said the mission of his team was to update the Senate President on the preparation towards the launching of the Yobe State Education Development Appeal Fund.

Bukar said the situation of education in the state, even before the insurgency, “wasn’t that good enough.”

“Unfortunately, when the insurgency came, it completely buried what had been done,” he said.

Bukar said it was in response to this development that Governor Buni declared a state of emergency in education sector and set up various Committees with a view to revitalize the sector.