Soludo talks tough, says he will end all revenue theft through executive order 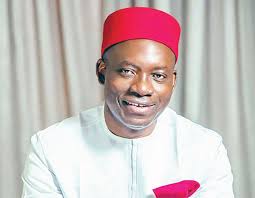 Apparently piqued by the theft of Anambra state resources, the Governor -elect, of the State, Prof Chukwuma Soludo, has taken a tough decision to put an end to all revenue window contracts in the state from the first day in office.
Soludo also disclosed that he will use executive order to terminate such theft of the state’s resources by revenue thieves.
The Governor elect spoke during a meeting with stakeholders at Agulu, Anaocha Local Government Area of the state on Saturday.
He berated the state internally generated revenue boss, for allegedly distributing revenue windows to some people.
“We learnt revenue windows are already being distributed. Is Nzekwu (State revenue boss) here? You people have started sharing windows (laughs), yes, you people are sharing windows.
“But, when you are sharing the windows, please be telling those you’re sharing them to that it stops on 16th March.
“Anyone you are giving window, tell them it will end on 16th March. Yes, whoever you are giving, endeavour to tell them.Because on 17th morning, I will sign an executive order cancelling all of them.” He said
The govt elect alleged that there are people who have been making their living off state funds but would be the first to indict government for not building infrastructure.
He reassured the people that he was on a mission to correct a lot of ills as Governor of the State.
“There are people who are used to this (revenue theft), that is what they do, that is what they thrive on, and they have made their whole living off the state.
“But they will be the first to tell government to build roads, and blame government for all the potholes on our roads, but the little that should accrue to government, they collect it and put in their pockets.
“It can not work, we have to decide if we want this to continue. If the decision is that we should continue with such illegal practice, we will quietly dust ourselves and join those who want to go on exile.
“But I’m sure we want things to work. For the sake and benefits of our children and children’s children, very kobo of state fund must go into state coffers and be made to work for the people, and there is no question about it,” Soludo added: