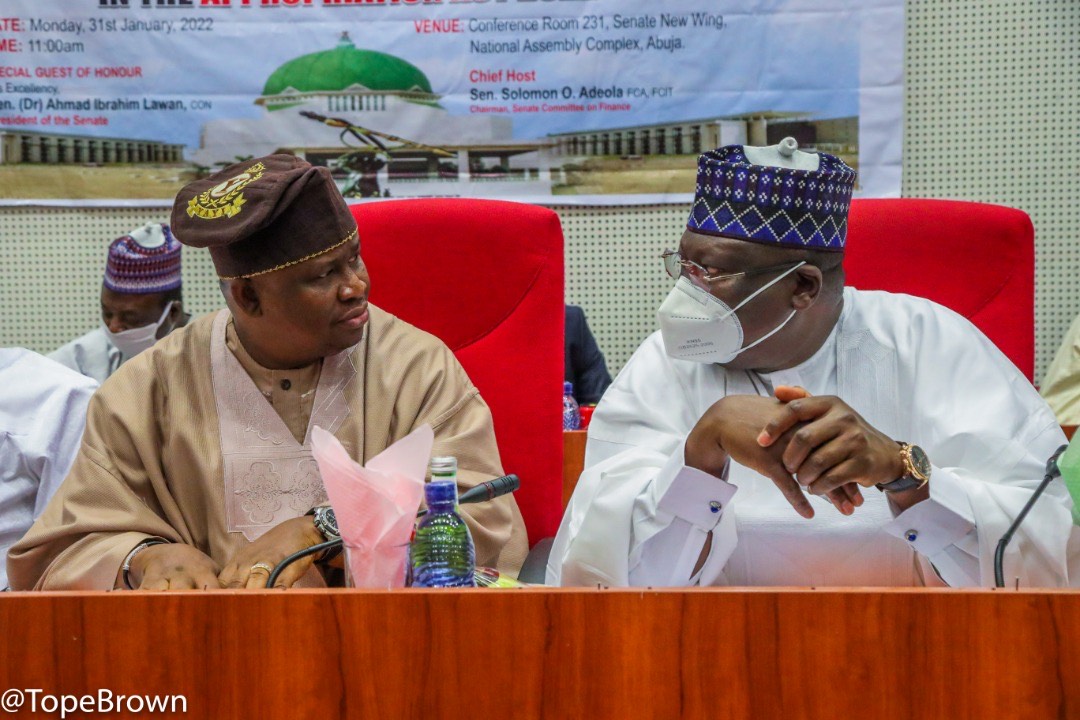 Funding for the N17.126trillion 2022 budget may not be realizable as some of the revenue generating agencies are complaining of different forms of hiccups.
This was happening as the Director General of National Agency for Food and Drug Administration Control ( NAFDAC), Professor Mojisola Adeyeye, lamented that the 2018, 2019 and 2020 budget of the agency were not passed by the National Assembly leading to warehousing of revenues generated by it for capital expenditure.
Complaints on meeting revenue targets by  affected revenue generating agencies came to the fore during the one day interactive session the Senate leadership and its Finance Committee had with them .
The Comptroller General of Nigeria Customs Service ( NIS), Col Hameed Ali ( Rtd), said some provisions of the 2022 Finance Act, have robbed Customs of its operational mandate on some revenue collections.

He specifically cited section 22 and 61(a) of the Act , incapacitating Customs from collecting some taxes like import duties.
“Mr President of the Senate , Distinguished Senators , I thank you for organising this interactive session on the need for improvement by all revenue generating agencies as far as internally generated revenues are concerned and funding of the 2022 budget are concerned .

“However let me bring to the notice of this gathering that some provisions of he Finance Act 2022, are incapacitating Customs from such revenue drive .
“Section 22 of the Finance Act 2022 seeks to amend the Federal Inland Revenue Service law Section 68 (1), (2), (3), (4) and (6) by allowing the Act to takes precedent over any other laws with regards to the administration of taxes, assessment, accounting, collection and enforcement of taxes and levies due to the Federal Government and the federation of Nigeria.

“When the law was signed, it did not state clearly, the extent and scope of the taxes and levies in question. We are aware that the taxes and levies under the responsibilities of the FIRS are income tax, personal income tax, capital gain tax, VAT and so on.
“However, the amendment is so wide and open that we in the Nigerian Customs Service took it that it had hindered our ability to collect levies and  other collections.
“Our understanding of the provisions is that all other laws which mandated us to collect are inconsistent with the new Act, then they are voided. This means that the law that mandates us to collect as revenue generating agencies, are voided completely. This means that we do not have the responsibilities to collect levies. If we don’t have the responsibilities to collect, what are we going to discuss here.
“We have consulted with lawyers and the conclusion is that the Act is confusing and if other revenue generating agencies decided to act on the provisions, they may decide not to collect  duties and levies”.
Making similar lamentation, the Director of Finance, Nigeria Immigration Service ( NIS), Professor Aba Georg, said the  N400billion the agency supposed to be generating as revenue on yearly basis is being cornered by UK based  firm, handing most of its outsourced services and operations .

According to him, contract on the outsourced services and operations given to the UK based firm on behalf of Nigeria Immigration Service in  2003 , gives  government 33% of proceeds , Immigration 7% while  the remaining 60% is cornered by the firm .

” This is our 7th time of tabling this complaint before the Senate or the House of Representatives . Please rescue us from the hook of this firm.

“The contract was entered into without the knowledge of Immigration since 2003 and those behind it , keep on renewing it and denying us about N400billion revenue on yearly basis .
“It is a rip-off and purely one sided contract bleeding Immigration and Nigeria financially on yearly basis “, he lamented .

Apparently piaued by the submission , the President of the Senate , Ahmad Lawan , directed the Committee Chairman, Senator Olamilekan Adeola ( APC Lagos West), to summon the Ministry of Interior for all the contract documents.

“This is unacceptable . We cannot continue like this. We must see the end of this contract in the National Interest “, he said.

On complaints made by the Customs boss, Lawan said, “I wonder why the Ministry of Finance is not here because we need their intervention now. Their presence here would have provided some clarifications. We took it for granted that since it was an executive bill, that there were some engagements among the agencies of the Federal Government.

“We also called for public hearing so that we could exrayed it. You are saying that you don’t have the legal mandate to collect taxes and it is a scary revelation.

“The Senate Committee on Finance and the Ministry of Finance and other agencies would look at the Act. If it is established beyond reasonable doubts that we need to amend it, we will do so without delay.

But Senator Adeola in his own response said the section cited by the Customs boss , was not targeted at the agency .

“What necessitated that singular act was as a result of the issue between the Revenue Mobilisation and Fiscal Commission and the FIRS. There were clashes between them from time to time. Some activities of RMFAC were not in tandem with the Act that established it. We discovered that the only way that we can make their roles explicit is through the Finance Act concerning the assessment and accounting of taxes.
“We discovered that RMFAC are going to agencies to audit their tax accounts which is not part of their responsibilities based on the law that established RMFAC.
“The only agencies saddled with that responsibility is the FIRS. That was what that law tends to address. We are ready to look into it again if other revenue generating agencies believe that it has hindered them from performing their responsibilities and we would amend it accordingly”, he said