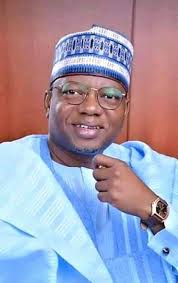 Niger state All Progressives Congress (APC) caucus in the National Assembly has endorsed Senator Sani Musa for the position of national chairman chairmanship of the ruling party ahead of February 26 national convention.

The NASS caucus stormed Minna the Niger state capital on Monday to present the national chairmanship candidate to the State governor, Abubakar Sani Bello and to the party leadership in the state.

Led by Senator Abdullahi Sabi, the Senate Deputy Chief Whip, the caucus sought the support and blessings of both the governor and the entire party members in the state for the national chairmanship aspiration of Senator Musa.

While presenting the chairmanship hopeful, Sen. Sabi said at the forthcoming national convention of the party, “one of us, Sen. Sani Musa is vying for the position of the national chairman of our party. We felt the time has come for us to come back home, meet our party, seek an audience with you (Governor) as leader of the state to present his aspiration and seek your support, counsel and everything for him to succeed.

Elated by the show of solidarity among members of the National Assembly from the state towards the actualisation of Sen. Sani Musa aspiration at the convention, Governor Abubakar Sani Bello described the support of the lawmakers as the right thing to do.

He noted that as the Chairman of North Central Governors Forum, his dream has been to see the geopolitical zone occupying prime positions of the party, hence his readiness to support the actualisation of the aspiration Sen. Sani Musa.

“From north-central, preferably, I want someone from Niger state. Home is home. I wish my brother success and luck. I will do whatever I can within my limited power and resources to see that he gets what he wants.

“I appeal to everyone to support my friend (Sani Musa) because he is a senator and I believe he will give the party a good direction. We will do whatever we have to do to see that we succeed in what we want.”

He however stressed the need to reach out to party leaders and members across the board, especially, President Muhammadu Buhari, who is the national leader of the party, noting that he will require not only the support of the state but all stakeholders.

He explained that the election of a national chairman “is not a decision for Niger state alone, it is National Chairman, not Niger state Chairman. We have a national leader who is the President. He is to be consulted before we make a decision. I feel we will consult him and see what he has to say. We will put you in prayer and I wish you the best.”

Earlier, Sen. Sani Musa said his decision to seek to lead the party was based on the need to give the party a new lease of direction and build a party that will groom and develop leaders at all levels of the party for the growth of the country’s democracy.

“My reason for going for the national Chairmanship is not far fetched. I want to provide a leadership that will be able to work with the manifesto of the party and to be able to show Nigerians that we are capable of doing this democracy. We can demonstrate a kind of energy that we can do as well as the USA do.

“If you look at Africa today, Nigeria is the largest democracy and we must be the shining example of others. APC today is the largest political party in Africa and we must have coherent leadership, leadership that is has cohesion, that will give Nigerians the best quality of governance.”

The chairmanship hopeful said he was not disturbed by the array of contestants. He maintained that “the antecedent and experience of every one of us will be tapped and the delegates will see who is worth what.”

All the members of the National Assembly from the state were in attendance both at the state party secretariat and the Government House.