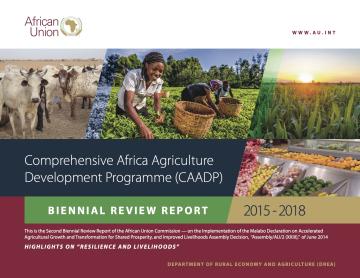 As the Third Biennial Review of the African Union (AU) Comprehensive Africa Agriculture Development (CAADP) comes up later this month, Nigeria and other African Countries are expected to improve on their implementation of their Malabo 2014 Declarations.

Arising from the the Maputo and Malabo summits of 2003 and 2014, a declaration was signed by the African Heads of States undertaking to implement a seven-point agenda including allocation of 10 per cent of their national annual budgets to the Agriculture sector.

The focus was to support at least, six per cent growth rate for the sector as encapsulated in the CAADP framework to improve food security, nutrition, and increase incomes in Africa’s largely farming-based economies with emphasis on the seven thematic areas.

The area include recommitment to Principles and Values of CAADP Process; Enhanced investment in Agriculture with 10 per cent spending target; Ending hunger by 2025; Halving poverty by 2025; Boosting inter African trade; Enhancing resilience of livelihoods and Mutual accountability to actions and results.

The first and second reviews however indicated that a lot of African Countries including Nigeria, were not on track in most of the thematic areas hence the need for enhanced awareness and sensitization of stakeholders and duty bearers.

It was against this backdrop that ActionAid Nigeria in collaboration with other Civil Society Organisations (CSOs) organised a two-day Pre-BR3 Launch Event titled, “Strengthening Accountability and Utilisation Biennial Preview Results – Count Down to BR3 Launch” in Abuja.

The pre-launch meeting was attended by Media professionals in the Agriculture sector, CSOs and Small-scale Women Farmers Organisation in Nigeria (SWOFON) for sensitisation of stakeholders towards the launch at the AU Summit of African Heads of States in Addis-Ababa, this month.

Mrs Constance Okeke, International Project Manager for Scaling up Investments in Agriculture, ActionAid Nigeria, speaking on the approaching BR-3 launch described it as an accountability process instituted to help measure the progress of CAADP implementation in all the African countries.

“Every two years, a review is done to see how the programme is being implemented and countries data are submitted to the African economic regional economic communities who in turn submits to the African Union.

“They are analysed and prepared as form of report to Heads of States during their summit at the beginning of the year.

This is the 3rd Biennial Review. It started in 2017 with the first report released in 2018 summit and the second BR for 2019 was submitted at the African Heads of States summit in 2020.

“The idea of having this event is to join forces and resources to ensure that one of the primary key stakeholders in the agricultural development which is the Media is at the forefront of these issues.

“Because they will also help push information accurately, push accountability processes across board so that we all have the shared prosperity and improved livelihood that the Malabo and CAADP goal is set to achieve by 2025.

“We expect the media to go out there to tell the world and the continent, why it is important that we should focus on agricultural transformation.

“By putting more resources, by making sure we have policies and programs that will make sure that everybody is food secured and we all have the shared prosperity that we all look for”, she said.

On the achievements of the first and second Biennial Reviews, the ActionAid Project Manager said there had been a lot of achievement but there was still enough room for improvement.

“For example, African Heads of States agreed that they would commit 10 per cent of their annual national budgets to Agriculture but we know that most countries are not doing that.

“Nigeria is working towards achieving results and from what we saw, they have made a huge progress from the first BR to the second BR we are also hoping that the third BR will be better.

“We want more investments in agriculture, better policies, participatory processes, joint stakeholders review of programmes and policies so that we can be on the same page and everybody can move at the same pace. (Ends)