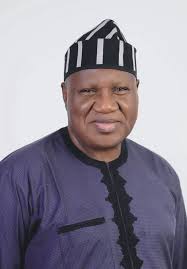 A leading governorship aspirant on the platform of the All Progressives Congress (APC) for 2023 in Benue state, Prof. Terhemba Shija has made a covenant with the people to prioritize security and development of the state simultaneously if entrusted with the mandate of state leadership.

Prof. Shija spoke on Saturday, in Beetse and Tsar, the council headquarters of Nyumagbagh and Mbatyouh council wards, both of Mbaduku clan in Vandeikya LGA of the state, where he went to formally inform and seek the blessings of his kinsmen and political constituents over his 2023 governorship aspiration.

The governorship aspirant declared that Benue under his leadership will chase to even pigeon holes and descend with iron-fists on all armed gangs and bloody invaders of Benue, until they are caught and appropriately disciplined.

According to Shija, while bringing insecurity in the state to a standstill, He would also vigorously pursue development of the state in all sectors simultaneously.

“Heaven knows, if I am elected Governor of Benue state in 2023, anyone who tampers with a Benue son or daughter anywhere, must be chased caught; there will be no escape route for anyone who sheds the blood of my people.” Shija stated.

The Governorship hopeful further lamented the shameful backwardness and underdevelopment of Benue, urging the state to know, it is now the dawn of a new era to repair the damage done in the past.

Shija noted that he has adequately prepared himself for the onerous task ahead from 2023, appealing to the people never to throw away the opportunity, as he pressed home his readiness for the state’s top job.

Prof. Shija who goes by the chieftaincy title of the “Zege- Kwaghfan -U- Tiv” -Great knowledge of the Tiv people- extolled the virtues and political sagacity of Late Engr. Joseph Igbetar, whom he said, brought him in to politics when he was very young.

In his remarks, Hon. Dominic Ihyuman, who spoke on behalf of both Mbaduku elders and political leaders of the clan said, over the years, Prof. Shija has demonstrated his rewarding capacity in leadership.

He noted that Shija and indeed, Kunav people have successfully midwifed or laboured for the political aspirations of prominent politicians in the state very religiously.

Ihyumun therefore, pleaded that time has come for other segments of the state to concede the 2023 governorship seat to Kunav and particularly, support a competent person like Prof. Terhemba Shija to lead the state to prosperity.