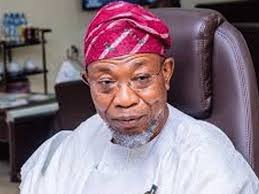 Coalition of Civil Society organisations in Osun State has demanded the immediste sack of the minister of interior Rauf Aregbesola over his unguarded utterances that are capable of aggravating the already tensed security situation in the country.

Aregbesola who was a two term commissioner for works in Lagos State also became Governor of Osun State for two terms and is now the minister of interior had taken on his erswhile godfather calling him names.

Although Aregbesola came short of mentioning Tinubu’s name, he launched some verbal attacks at the APC National Leader over his faceoff with Oyetola.

He said that Tinubu abused his leadership and suddenly assumed the god complex.

“We followed and served this leader with all our might. In fact, our loyalty to him had caused some people to start wondering if we were no longer Muslims,” he said.

Apparently piqued by how he had freely embarrassed the APC national leader the spokesperson of the coalition, Dr. wasiu Oyedotun Ali during a press conference in Abuja on Thursday demand that President Muhammadu Buhari, call Mr. Rauf Aregbesola to order and charge him to focus on his official responsibilities instead of going about causing civil unrest.

According to him, failure to do that will embolden him to inflame the otherwise peaceful Osun State. “Where he cannot be cautioned, we demand his outright sack or redeployment if he cannot act responsibly in line with the dictates of the Office he presently holds.

“A Public Officer must never be seen acting contrary to the spirit and provisions of the Nigerian Constitution.

“Where the Federal Government is unable to act swiftly to caution Mr. Aregbesola, the Senate of the Federal Republic must show capacity by sanctioning his sack and impressing it on the President to effect same. “Failure to do this will obviously bring disrepute to the exalted office of the Honourable Minister.
Dr. Ali also urge the President to withdraw all security agents attached to him, except men of the Nigeria Police, to prevent him from turning them in to agents of criminality, used to undermine not just the the Nigeria Police Force, but also National security efforts, especially in Osun.
Dr Ali quoted Part 1 (Code of Conduct for Public Officers) of the Fifth Schedule of the Constitution of the Federal Republic of Nigeria that clearly provides in Section 1 (General) that “A Public Officer shall not put himself in a position where his personal interest conflicts with his duties and responsibilities.”
Section 9 (Abuse of Powers) of the same Fifth Schedule provides that “A Public Officer shall not do or direct to be done, in abuse of his office, any arbitrary act prejudicial to the rights of any other person knowing that such an act is unlawful or contrary to any government policy.”
He accused the minister of having violated the sections so quoted in his utterances.

“Mr. Rauf Aregbesola in the past one week has engaged in public shows of rascality, encouragement of followers to behave in manners that undermine the superintendence of the present administration in the State, denigration of Elder Statesmen, among many others.

“We reckon that a public officer, expected to act in manners that promote public security, but who is seen making utterances that encourage violence, insubordination and disrespect to constituted authority, is acting a script that can only promote disunity, acrimony and unrest.
“We state unequivocally that recent utterances of the Minister of Interior, are today heating the polity in Osun State to a point where residents now fear for their lives.
“While we understand the expediency of political games, we do not see any reason why a government official will be leading a process that is leading to unrest.
“While superintending over Security Agencies under the Ministry of Interior, Mr. Rauf Aregbesola, has now turned security details attached to him by these Agencies into tools of political warfare, clearly undermining the jurisdiction of the Nigeria Police Force in maintaining security in Osun State.
“We have seen recently how men of the NSCDC, the NIS and the NCS sporadically shot in the air to terrify citizens of the State in Osogbo and other towns within the State. We refer to the official release of the Osun State Police Command, concerning the actions of men of the NSCDC, NIS and NCS.

He quoted the Command’s Spokesperson, Yemisi Opalola, to have accused the Minister of Interior, of moving in a convoy of personnel of NSCDC, Correctional Service, Immigration, as well as some unidentified armed people, suspected to be political thugs along Orisumbare/MFS Road, Osogbo.
“Suddenly, some of the security escorts of the minister started shooting sporadically into the air without any provocation nor attack, thereby causing members of the public to scramble for their safety. Thirteen empty shells of G-3, assault and AK-37 rifle were recovered along the road after the minister’s departure. No casualty, however, was recorded”
“The Osun State Command of the Nigeria Police Force is aware and has expressly stated it, that men of the aforementioned security agencies, in collusion with unidentified armed thugs, terrified innocent citizens in Osogbo and other towns of the State, on Monday, 14th February, 2022.
“From all intents and purposes, the shooting was aimed at instilling fear in the minds of perceived political opponents and showing to the public that Mr. Aregbesola possesses capacity to set the State on fire if tempted to so do.
“While it remains illegal to use Officers of Security Agencies who should be protecting the public to terrorize same members of the public, it is criminal for a Public Officer to be the one behind such acts of insurrection and criminality.

“By set structure of governance, men of the Nigeria Police Force are primarily responsible for the maintenance of law and order, while also being directly responsible for prosecution of persons found guilty of crimes. “The NSCDC, also saddled with responsibilities that closely agree with the mandates of the NPF, is required to work with the Police in ensuring a safe society for all.

“However, having had its officers utilized as agents of terror on Monday, 14th February 2022, the NSCDC is today at loggerheads with the Police Force in Osun State.
“After the Osun State Command of the NPF had released its official position on the shootings that occurred in Osogbo on Monday, the NSCDC immediately went on the defensive, claiming that its men only protected the Minister from an attack from hoodlums, a claim that the Police had since faulted.
“Aregbesola, despite being responsible for coordination of public security, is, by his actions, promoting disunity and insubordination between two key security agencies that should ordinarily be cooperating. This portends grave danger for the maintenance of peace and security within Osun State and indeed, Nigeria.
“It is needless to say, that a political war, orchestrated by a public officer, now culminating in an inter-agency war can only spell doom for maintenance of order in a country that is already battling with several security challenges.”