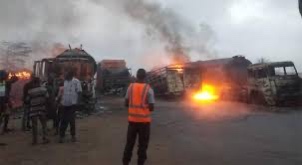 The Minister of Humanitarian Affairs Disaster Management and Social Development Sadiya Umar Farouq has expressed deep shock after no fewer that 17 persons were reportedly burnt to death in a road accident which occurred at the Lagos-Ibadan expressway on Friday.

The special adviser on media to the minister Nneka Ikem Anibeze said the accident which involved  a Mazda bus and a petrol tanker occurred near Isara Bridge in Ogun state at about 5.00 a.m.

She said reports had it that there was a head on collision which resulted in the explosion adding that the number of casualties could not be confirmed at the time of the incident.

She quoted Umar Farouq  to have described the disaster as colossal while mourning the loss of lives in the inferno.

“I am deeply saddened by the loss of many lives in this accident. It is very unfortunate. We deployed the National Emergency Management Agency at the time of the accident to work with SEMA and the Federal Road Safety Corps in the rescue operation.

“It has been a very difficult rescue mission as it happened in the early hours of the morning.

“I sympathize with the families of the dead and pray that God will strengthen them in this period of grief”, Farouq said.