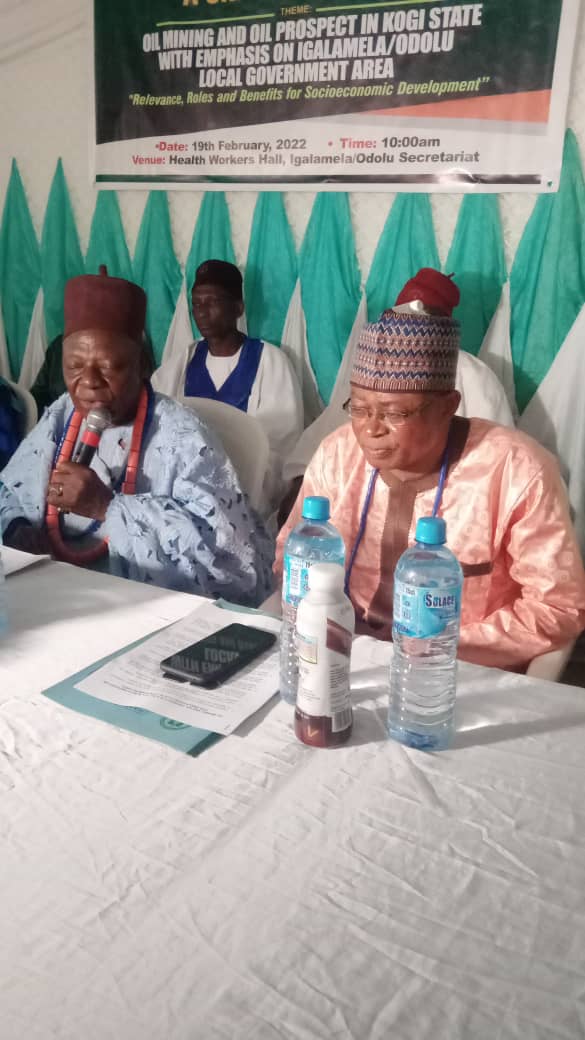 The Igalamela Community Development Association, (ICDA) has taken its destiny in it’s hands by activating one of the most unique value addition programme in the community to bring to the fore abundant deposits of crude oil that are yet to be tapped.

Not withstanding that Kogi State has already been named an oil producing State on account of the crude oil discovered in Ibaji Local Government the Association is poised to championing a move to discover more oil wells in Kogi State starting with Igalamela.
To this end the ICDA organized a one-day seminar/town hall meeting on the topic: oil mining and oil prospects in Kogi State in Collaboration with NNPC Professorial Chair on Basinal Studies (Chief Professor Nuhu George Obaje)
The event which took place on Saturday 19th February 2022 had in attendance His Royal Highness the Etemahi Igalamela and Chairman Igalamela/Odolu Area Traditional Council Chief Abel Etuh, Religious and Political Leaders, as well as other eminent personalities.

Speaking at the seminar, the President of the association Mr. Isaac Inah expressed appreciation to NNPC and President, Muhammad Buhari, for the endowment of the professorial chair on an illustrious son of Igalamela, Professor Nuhu George Obaje.
According to Inah organizing the seminar at a most auspicious time when the country is faced with paucity of funds to execute projects and programmes speak on how determined the association is to bring economic prosperity to the land.
This he said is instructive and expedient based on the urgent need for diversification and sourcing for new revenue base to augment the depleting one.
He admonished the people to ensure effective participation so as to fully galvanize the actual essence of the programme.
The NNPC Chair Professor and traditional title holder of Oma-oja Etemahi Igalamela, Nuhu George Obaje, who is an indigene of the community and guest speaker for the seminar said despite dwindling fortunes, oil and gas will continue to be a major contributor to the Nigerian economy for many decades ahead.
According to him oil will continue to constitute the major primary source of energy despite the upscale in the development of renewable and alternative energies.
“Like in the status quo, it will bring the largest revenue into the Federation Account and derivation monies will continue to accrue to oil-bearing States depending on the amount of oil mined from within the State.”
He indicated that as the country moves towards decarbonization of her energy sources and resources, natural gas offers the opportunity for deployment as alternative clean energy.
He pointed out that Nigeria has abundant natural gas, far more than oil emphasising that natural gas is the antidote for industrialization, job creation and poverty elimination.
Speaking further he said “ninety five percent of Nigeria’s current oil production comes from the Niger Delta with minor inputs come from the Anambra Basin and the Dahomey Basin.

“Two Nigerian sedimentary basins straddle Kogi State, namely the Southern Bida Basin covering some parts of Kogi West (Kotonkarfe, Gegu, Ahoko) and the
Northern Anambra Basin covering all of Igalaland (Kogi East).
“Outside the Ibaji area, the oil deposits in these two basins in Kogi State are speculative and research conjecture as no oil is being mined and no operator has been licensed to operate.
“The oil deposit in the Echenno area in Ibaji LGA is licensed to an operator (Orient Petroleum), it is outside research conjecture and not speculative but confirmed.

“The two wells producing some quantity of oil there make Kogi State to be counted as an oil producing State. Federal Government is owner, Orient Petroleum is the licensee, and Kogi State benefits from getting 13 percent of any production made from the two wells.
“Echenno will benefit from the host community fund”. Speaking further, again he indicated that “Kogi State can derive far more funds if the research conjectured/speculative areas have been matured to operational areas with licensees.

“Many areas around Idah and Igalamela are moving from research speculative to near confirmed prospects.
“NNPC will deploy advanced technologies to move the prospects to confirmation. Once confirmed, operators will acquire lincences over the blocks, explore more and begin mining of the oil. This will lead to more derivation to Kogi State with Igalamela and Idah benefiting from the host community fund, in addition to employment generation.”
“These are the roles the Professorial Chair plays along the NNPC value chain in the exploration of Nigeria’s frontier basins, comprising the Anambra Basin, Benue Trough, Bida Basin, Chad Basin, Dahomey Basin and the Sokoto Basin.
“In these same ways, NNPC made the huge discovery of more than a billion barrels of oil in place in the Kolmani River 2 well in the Gongola Basin in Bauchi State.
“In all of these, political sagacity, entrepreneurial acumen and technocratic exposition must all be brought into synergy rather than at cross purposes to achieve the objective of prosperity for our people and poverty elimination from our land” he said.
The Professorial Chair was accomapanied by many research scientists, including Professor Taufik Adedosu, Director of Research, Innovation and Discoveries, Ladoke Akintola University of Technology Ogbomoso, Oyo State.

Delivering goodwill messages at the occasion, a former Deputy Speaker of Kogi State House of Assembly and also one-time member of the House of Representatives, Rt Hon Ismaila Inah Hussaini,
said he was deeply involved in resolving the imbroglio between Anambra and Kogi States and finally getting Kogi State declared as an oil producing state.

He called on critical stakeholders in Kogi State and from the Igalamela and Ibaji communities to engage in an appreciation visit to the Presidency.
In the same light, Honorable Murtala Yakubu, a prominent political figure from Kogi State and an
indigene of the community expressed satisfaction with the presentation and promised to extend
whatever support possible to the community and the professorial chair.

After the seminar the association resolved to sensitize all the stakeholders including political office holders from the community to actively join hands with the Chair Professor to move current oil and gas potentials in Igalamela to actionable level by the NNPC.
They also resolved that the association would step up further action at bringing the dream to realization by putting in place a working committee that will push the desired follow up from the current stage.
Another resolution indicated that the association would be mandate to organize similar seminars to torchlight other areas of economic development such as cashew value chain production to help reduce the menace of unemployment and the attendant vices.
“The meeting resolved to call on all sons and daughters of the Community to avail themselves the opportunity to attend and support the forthcoming National Convention in April this year where adequate actionable decisions will be taken.
“The meeting commended the Chair Professor and his team for activating one of the most unique value addition programme in the community, and further praised the NNPC for finding their illustrious son worthy of this great service to the nation.”
Other prominent personalities at the occasion included the current Kogi State SIEC Commissioner from the Area, Hon Musa Adama (Babakeke) The Provost, Kogi State College of Health Sciences, Dr. Anyegwu, Captains of Industries from the area, political stalwarts, religious leaders and other community leaders and dignitaries..