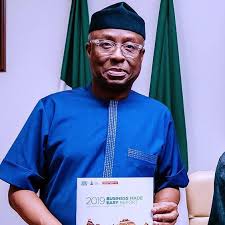 House of Representatives Committee on Public Accounts has summoned the Minister of Trade and Industry, Chief Niyi Adebayo for the umpteenth time over loss of revenue to the tune of over N32 billion by the Federal Government in the nation’s Export Free Trade Zones.

The Chairman of the Committee, Hon Busayo Oluwole Oke (PDP-Osun) handed down the order following the absence of the Minister who was expected to shed more light on the claims of Companies indicted by the office of the Auditor General of the Federation (oAuGF) that the Ministry actually issued them with the alleged fake Certificates of Capital Compliance for Tax waivers.

The Multinational Companies in the Free Trade Zone were said to be parading fake Capital Compliance Certificates over the years which had cost huge loss of revenues expected to be collected by the Federal Inland Revenue Services,(FIRS).

According to him, “During the course of our investigations, the companies claimed that the Ministry issued them with Capital Compliance Certificates and in our wisdom, we decided to summon the Minister to confirm, we have extended several invitations to him but as we speak, he is yet to honour our invitation

“Parliament cannot continue to wait for him and for the Nation to continue to witness more revenue loses, that’s why we are asking the Minister to appearp before this Committee to speak on the claims of the companies,

“Consequently, the Committee is calling on the Honourable Minister to appear in person before the Committee on this matter because it appears some people are colluding with the companies to defraud the Federal Government of its legitimate revenues, thereby making the government to be unable to fulfill its Constitutional roles to the citizens.

“In addition, the Committee is reporting the Minister to his employer, President Muhammadu Buhari to be aware how some of his appointees are carrying out their assignments

“Consequently, an official letter on the matter should be forwarded to the Secretary to the Government of the Fnederation, SGF, the Chief of Staff To the President, and the Minister of Justice and the Attorney General of the Federation for them to be aware of is going on