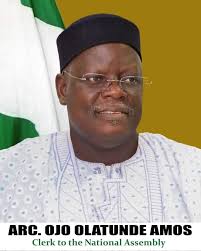 The forum is a body of  parliamentary staff employed on tenure basis working with lawmakers in the upper and lower legislative Chambers.
At a world press conference on Thursday in Abuja, Chairman of the Forum, Alhaji Salisu Usman Zuru lamented that the 9th National Assembly under the current leadership has subjected the legislative aides to untold hardships since 2019.
The group further alledged that there was monumental corruption and stealing perpetuated by the Clerk, given that there was a budgetary provision for offsetting of arrears in 2019, but which the whereabout of the fund remain a mystery.
The aides averred that their salaries and arrears ought to have started from the date of assumption on the June 11, 2019 being inauguration day alongside their principals, but in a twist, the Arch. Ojo-led NASS management did pay some aides and left others.
The forum revealed that they have explored all a available means to sort out the impasse without fruitful results, even as the House of Representatives sometime ago passed a resolution that all arrears of salaries, allowance and Duty Tour Allowance (DTA) be paid.
Amid pressure to be paid after the House Resolution, the Chairman of the forum, said, a new twist was introduced as the CNA told the NASSLAF executive that there was no money.
The Chairman explained the NASSLAF executive was once accused of compromise because of their firm belief of approaching the matter with diplomacy, stressing that it was the ‘compromise belief’ by some members that gave rise to another forum operating under the aegis of “Salary Affected Legislative Aides Forum.”
“In the 2019 Appropriation Act, the sum of N128 billion was appropriated for salaries and overhead for legislators, National Assembly bureaucracy and legislative aides.
“Legislative aides’ matters being directly under the office of the Rt. Hon. Speaker of House of Representatives, aides got the attention and sympathy of some of their principals in the House of Representatives to raise the issue and seek respite on the floor of the House.

“The issue was raised at the floor of the House and was unanimously adopted and referred to the House Services Committee for investigation. The Committee led by Hon Wahab Raji in their report to plenary in July 2020 recommended immediate payment of all outstanding salary arrears without delay.

“The 9th NASSLAF EXCO have been battling management on these issues since inauguration in October 2020 to no avail. Management at first claimed that they have not received the report of the Hon Raji committee mandating it to pay up the arrears.
“Again, EXCO mounted pressure on Hon Raji committee to facilitate the transmission of the report to the CNA. On receipt of the report, the next pranks by management was that there was no money.
“All these while, our colleagues have concluded that the leadership of NASSLAF have been compromised. This led to the emergence of what is today known as the “Salary Affected Legislative Aides”, a pressure group, ostensibly, to support the effort of EXCO.”
They further accused the NASS management of not paying minimum wage, adding that the National Assembly Service Commission was also complicit in the plight of aides.
But in a swift reaction through a statement by the Special Adviser on Media and Labour to the Clerk, Adesoro Tolu Austen, he dismissed the allegation, describing it as unfounded and speculative.
He said, NASS management treats issues on the basis of priority, adding that NASSLAF executive should learn to communicate challenges faced by the National Assembly.
The Clerk to the National Assembly, Ojo Olatunde Amos, described as baseless speculative and unfounded allegations by the National Assembly Legislative Aides Forum (NASSLAFF) that the National Assembly Management allegedly diverted and embezzled funds appropriated for Legislative Aides
He said: “NASSLAFF should learn to exhaust the internal mechanism for dispute resolutions as stipulated in the extant Labour Laws and also come to terms with reality of the paucity of funds confronting the Legislature and the nation with urgent need to prioritize the copious needs on ground”, he said.