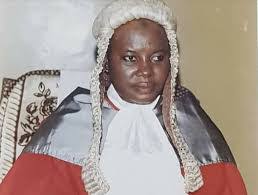 The chief Judge of Niger State, Justice Aisha Lami Bawa Bwari has lashed out at the legal unit of the state police command and prosecuting police officers for deliberately keeping suspects in detention without proving any case against them.

This was happening against the backdrop that some inmates files could not be found just as some have spent more years than they would have spent if convicted.
The chief judge who spoke when she granted amnesty to twenty Five inmates awaiting trial at the Minna Old correctional custody warned the police to desist from keeping suspects in custody without establishing any evidence against them in court.
The chief judge had embarked on an official visit to the correctional centres to decongest the centres across the state.
Her visit which was to have taken place earlier was rescheduled due to insecurity that has been pervading the State
Justice Bwari also embarked on the tour as part of her valedictory court session starting with visits to the two correctional centres in Minna

During her two days visit to the correctional facilities in Minna she attended to some cases of inmates that have languished in the facilities without trial.
It was discovered that their case files could not be traced in the office of director of public prosecution (DPP) in the Ministry of Justice.
It was further gathered that those released by the chief judge have been in detention beyond their possible jail terms if they convicted.
The chief Judge also pardoned those who have turn a new leaf while is detention while others were released on health ground.
She told the inmates that were pardoned to guide against any act that will bring them back to the facilities stressing the need for them to engage themselves in meaningful ventures that will make them self reliant.
Speaking earlier, the state controller of the correctional centres in Niger State Alhaji Abdulkadir Sulyman commended the chief judge for the visit noting that her visit has decongested the facilities.