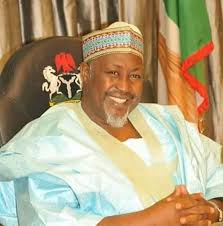 The Nigerian Union Of Local Government Employees (NULGE) has honored the Jigawa state governor, Alhaji Muhammadu Badaru Abubakar with the ‘Labour Governor of The Year 2021’ award for being exceptional in payment of salary and pensions as at when due.

The National president of the Union, Comrade Akeem Ambali Olatunji made the presentation of the award to the governor when he led the National , Zonal and state executives of the Union to government house, Dutse.
He said they considered him for the award because he has been the most workers’ friendly governor.

Comrade Ambali commended the governor for giving adequate priority to the payment of civil servants salary and entitlements describing him as the “Most Workers Friendly Governor”.

According to him the leadership of NULGE is at the government house Dutse to present an award of honour to governor Badaru who has been so honoured as “Labour Governor of The Year 2021” by the Union.

He explained that, the governor was chosen for the award in consideration of his performance and good relationship with workers whom he regarded as key partners in governance.

Akeem explained further that, as a reports shown how activities have been paralyzed in many local government Secretariats across the country, in Jigawa state the story is different, all the 27 local government are kept busy and vibrant by the governor Badaru”s good policies.

“We are aware that, Governor Badaru was the first Governor to implemented the 30,000 minimum wage ading also that he never failed in paying workers salary since assuming the mantle of leadership in the state.

“The payment of worker’s pensions, gratuity and other entitlement in Jigawa state is up to date, therefore we must commended the governor and also present this award in appreciation to his passion for workers welfare.

In his response Governor Badaru expressed appreciation/ happiness fir the honor describing it as a source of encouragement.

The Governor promised to continue collaborating with civil servants who are the engine room of government for effective public service delivery in the state.