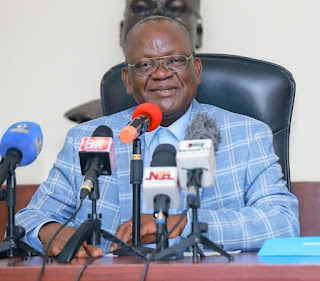 In a statement he issued on Sunday, February 27th, 2022, the Governor said: “With this victory, it is no longer in doubt where the people stand in 2023. It is a clear road map that Nigerians have aligned with the PDP in its mission to rescue and rebuild Nigeria from the misrule of the APC”,

The Governor’s greatest joy was the fact that despite the intimidation by agents of the state government in Plateau, the people demonstrated their resolve and indomitable spirit in the pre-election, during the election and even post-election.

He assured Nigerians that the PDP will live up to its billings by working for the peace, welfare and restoration of security of the citizens of the country.

Governor Ortom promised that PDP will return Nigeria to an egalitarian society where every citizen irrespective of tribe or religion can pursue his or her legitimate ambition in any part of Nigeria without fear of intimidation or molestation.

He said that even though the PDP lost in the state assembly by-election, it was with a slim margin. This means that our projection is on course.”

A couple of weeks ago, Ortom as the chairman of the PDP campaign council in the Federal Capital Territory council polls, led the PDP to victory against the APC which had the President and the minister in Abuja.

He said that with the series of victories recorded by the party in recently conducted elections, “it is a clear testimony that Nigerians are tired of the inept leadership of the APC. And we will not disappoint Nigerians in our resolve to rebuild the country from the ruins of the current misrule.”

The PDP candidate in the Jos North/Bassa Federal Constituency bye-election, Hon. Musa Agah Avia was declared the winner after he polled a total of 40,343 votes.

The Governor on behalf of the PDP campaign council for the Plateau federal representative seat congratulated members of the campaign council, the PDP national leadership, Governors and stakeholders in Plateau State for the support given to them to achieve the victory.