Oyetola floors Aregbesola in own ward, as faction alleges manipulation 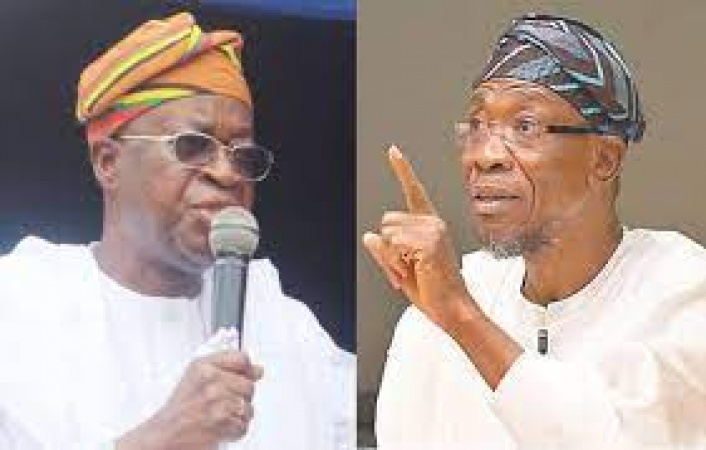 Governor Adegboyega Oyetola has floored his estranged godfather Rauf Aregbesola at his ward 8, Ifofin, Ilesha East in the ongoing primary election of All Progressives Congress (APC).

Aregbesola was not even present to vote at the ward during the exercise.

Arrowhead of the minister’s loyalists of Aregbesola at Ward 8, Ifofin, Ilesha East, Saheed Adegoke, confirmed that the Minister was not around to vote.

At the end of the exercise, the anointed aspirant of Aregbesola, Moshood Adeoti, score 146 votes against Governor Oyetola’s 309votes.

Meanwhile, Oyetola had expressed the optimism of carrying the day in the ongoing governorship primary when he spoke with newsmen shortly after voting at Ward 1 Boripe in Osun State.

The Governor commended the conduct of party members and the massive turnout despite intimidation from some quarters.

His words, “Let me say that the turnout has been meaningful and I thank God that we were able to do it peacefully.

“All the members of the party have the opportunity to decide who will carry the flag of the party… I happened to be one of the aspirants as well and I don’t expect anything less.

Speaking about the absence of agents of other aspirants in some voting centres, he said: “It is their choice not to be at the ward. We had the stakeholders meeting yesterday, we are all expected to have our agents around here, perhaps for whatever reason to decide not to be part of it, so I’m not bothered at all.

“I’ll win by the grace of God. I want to appeal to all of us to see this issue as a family affair. It’s APC all through.

“We should brace up for the challenge ahead. We are going to face another party in this campaign we don’t know yet.”

However, the faction loyal to Aregbesola has condemned the governorship primary.

In a statement by its spokesman, Abiodun Agboola, the faction alleged widespread irregularities in the exercise conducted by the Osun APC Primary Election Committee led by Governor Abdulrahman Abdulrasaq of Kwara State.

“It is necessary and important to inform the general public and Governor Abdulrahman Abdulrasaq led Osun APC Primary Election Committee of the ongoing irregularities in the conduct of the primary election of the All Progressives Congress (APC) in the State of Osun.

“We strongly condemned the conduct of the primary election because it is nothing but a sham with a fraudulent process to favour Governor Adegboyega Oyetola. Verified information from the agents of Alhaji Moshood Adeoti, our governorship aspirant, has it that there are no record and result sheets in any of the 332 wards of the state.”

The APC conducted the primary election across the 332 wards in the state using the direct mode which allows party members to choose the candidate of their choice.

Oyetola, who is seeking re-election for a second term, fell out recently with his predecessor and political godfather, Aregbesola, who now supports a former Secretary to the State Government (SSG), Moshood Adeoti.

A former Deputy Speaker of the House of Representatives, Lasun Yussuff, is also a contender in Saturday’s exercise.

According to the Aregbesola faction, there was no proper accreditation in a majority of the ward collation centres where voting took place and the accreditation done in some places were skewed in favour of Governor Oyetola as his supporters were allowed to pass through the process without much ado.

It claimed that the names of many members of the APC who wanted to vote for Adeoti were missing in the register of the party, adding that they had envisaged such by calling for the display of the party register before the conduct of the primary.

The faction also alleged that appointees of the governor were used as collation officers, which made the purported rigging plan of Oyetola an easy task.

“Loyalists and supporters of Adeoti are being chased and some were brutally attacked in wards where they have a strong presence,” it said. “Oriade, Olorunda, Osogbo, Odo-Otin, Boripe, and Ile-Ife are the worst of this act of intimidation and disenfranchisement.

“Where results of the election were announced (not recorded), the figure declared for Oyetola was highly inflated in the affected wards. INEC officials were noticeably absent in most of the wards to monitor the election.

“This is unacceptable. It is a shame that a sitting governor could resort to malpractices in his desperate bid to secure a second term ticket.” (Based on reports by The Nation and Channels TV)