PARE urges community Vigilance groups to operate within their mandate 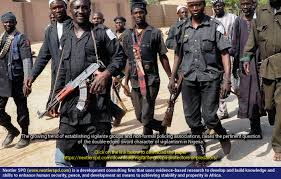 Pastoral Resolve (PARE), a Non-Governmental Organisation (NGO) has called on vigilante groups and Hunters Associations to operate within their operational mandate to avoid escalation of conflicts in and among communities.

Programme Manager, PARE, Muhammad Munji Sanusi, made the call at the end of a four-day Hybrid Dialogue for Vigilante groups with Bakumba and Gadan Shagari communities of Lokoja Local Government of Kogi on Friday.

Sanusi said PARE as an NGO working on areas of Peace Building, Conflict Management and livelihood, education and health, was out to tackle the hydra-headed impasse arising from pastoralists and farmers’ clashes, through constructive engagement.

He urged the vigilante groups and Hunters Associations to be fully abreast of their terms of engagement and operate within the limits of their mandate.

The Programme Manager decried a situation where vigilance groups and associations created to assist in ensuring unity and peaceful coexistence in communities turned out to be their albatross in clear deviation from the purpose for their creation.

Sanusi therefore, urged them strive to collaborate and cooperate with leaders and all members of the communities to engender peace and peaceful coexistence while complementing the efforts of regular security agencies.

He said that the dialogue was organised as part of the implementation of the PARE project, Community Initiatives to Promote Peace (CIPP), funded by United States Agency for International Development (USAID).

The Programme Manager said the CIPP was a 5-year program being implemented in six states in Nigeria with Kaduna, Kano, Katsina in the North West and Kogi, Benue and Plateau states in the Middle Belt (North-Central).

Organisation had been able to work with conflicting communities in the state on issues around farmer pastoralist conflicts to engender peace and unity in the communities.

Okpe attributed the herder/farmers onslaughts to negative perceptions saying that PARE had been able to train community groups on interest-based negotiations to resolve disputes under key activities like the Community Conflict Prevention Forum (CCPF).

“In places like Odu, Dekina Local Government, there were places that pastoralists could not graze before but now they can go through all those areas without any issue and all those things are being achieved because of our intervention.

“In Bakumba community, we were able to open some cattle routes that were blocked because of conflicts. Today, because of the intervention of CIPP, most of the cattle routes have been reopened and are being used”, he said.

Also speaking, Kogi Commissioner of Police Edward Egbuka, urged the farmers, herders and the vigilante groups to collaborate for peace especially in the communities.

The CP who was represented by Ajiboye Alaba of the State Investigation and Intelligence Bureau (SIIB), urged the groups and their leaders embrace justice in their dealings and support each other’s businesses to thrive.

Mr Dangara Moses, General Secretary of Bakumba community Committee on Security commended PARE for the intervention and attributed the usual face-off between the vigilantes, farmers and herders to negative perceptions.

He said that with the intervention of PARE, the negative perceptions were giving way to plausible communal living through the periodic interface with farmers and the pastoralists. (Ends)