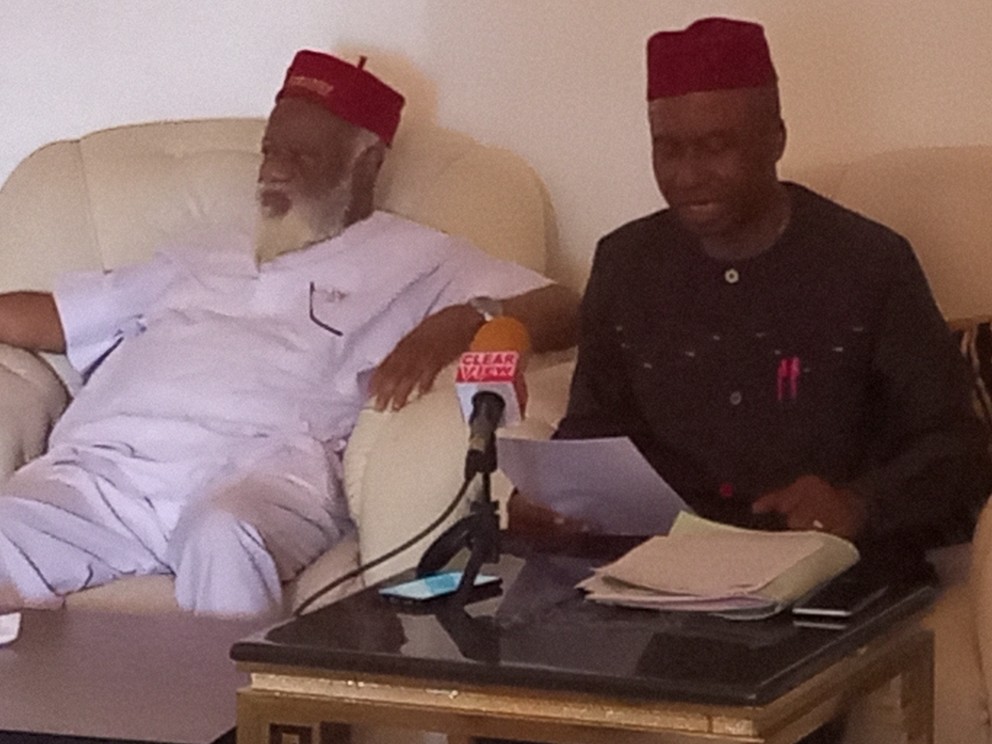 ***Warns, it will sanction any Igbo son that stoop to take VP position

The Igbo Elders Consultative Forum has declared that rotational Presidency is constitutional by virtue of the provision of the Federal character principles in the constitution.
Speaking at a press conference in Abuja at the situation room in Okwadike Close, Asokoro in Abuja on Wednesday, the secretary of the Forum Professor Charles Nwekeaku, said

“Legally, morally and strategically it is the turn of the South East to produce the next president of this country as the other zones have been given the opportunity to serve Nigeria in that capacity

Section 14[3] of the 1999 Constitution of Nigeria provides thus:

‘The composition on of the Government of the Federation or any of its agencies and the conduct of its affairs shall be carried out In such a manner as to reflect the Federal Character of Nigeria and the need to promote national unity, and [also] to command national loyalty, thereby ensuring that there shall be no predominance of persons from a few states or from a few ethnic or other sectional groups in that Government or in any of its agencies.’

However, he alleged that the South East has no representative in any of the aforementioned positions, which he said is a clear breach of the principle of Federal Character.
“We decided to search for that section of the constitution because some people will come out and say there is no rotational presidency in the Nigerian constitution.
“We are saying that section 14(3) that provides for federal character implied that the rotational presidency is also in the constitution.”
The South East is strategically favored to produce the next president in 2023 for the fact that it has only occupied the position for only 6 months under Gen J. T. U. Agutyi ironsi, and has not come close to it since the current political dispensation that started in 1999
According to him, “A Nigerian President of South East extraction will bring out the Igbo spirit of ingenuity creativity, entrepreneurial, cooperative and economic disposition to rebuild Nigeria.
He said, numerous well established Igbos in Diaspora will be encouraged to come home and invest massively in the country to facilitate the economic recovery of Nigeria

“The 2023 Presidential election is the best time to fully address the injustice, marginalization and integration of the Igbos, as the Presidency is expected to rotate to the North after eight years

“Denying South East the opportunity of producing President of Nigeria in 2023 will not only aggravate the unprecedented separatist agitations across the country, but also amount to perpetuation of injustice, deprivation, discrimination and gross marginalization of the Igbos in Nigeria
“South East has many distinguished professionals, technocrats, economic and political leaders that are presidential materials, who are available and ready to make Nigeria work again for the benefit of all sections of the country
“The-unity of Nigeria: will be better guaranteed if the South east is allowed to produce the next President of Nigeria in 2023 for the sake of justice, equity and fairness

“The Igbo Elders Consultative Forum is aware of the orchestrated subterranean moves by some professional, but amateurism political jobbers and unpatriotic elements to change the popular demand of a spectrum of well-meaning and patriotic Nigerians that the Presidency of Nigeria in 2023 should be zoned to the Southern part of the country, preferably South East, by standing logic on its head.
“We maintain unequivocally that any political party that does otherwise will not get the votes of the South, and, will, ultimately lose 2023 Presidency.
“We are waiting for them, as they will meet their political waterloo this time if they insist on shortchanging the South East people this rare opportunity of producing a credible, patriotic, detribalized and dynamic president of Nigeria in 2023.
He used the occasion to warn against any Igbo son that will betray the agenda by stopping to take the vice presidency position.
According to him, such a fellow would be sanctioned.
The chairman of the forum Dr. Chukwuemeka Ezeife called for prayers for the Indigenous People of Biafran Leader Nnamdi Kanu who was being arraigned in court same day.
“Our son is again in court there and we are not expecting anything serious from the court except they add some charges but what we should do is to seriously go to God for prayers so that Nmamdi Kanu is released in very quick time.
“All powers belong to God, whatever power we are holding on earth.
He expressed gratitude to the young men and women in Nigeria who do not belong to those who have buried their consciences but have been advocating for power to shift to the South East.