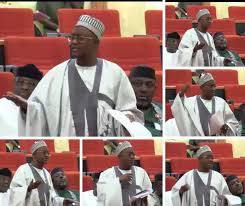 Apparently piqued by the unending nefarious activities of bandits and Kidnapers in Katsina State and other parts of the country, Senator Kabiru Barkiya (APCKatsina Central) on the floor of the Senate on Tuesday admitted the Government and the rest of them know where the bandits are hiding.
Senator Barkiya was contributing to a motion on urgent need for Federal Government to take drastic actions to bring to an end the act of Banditry and Kidnapping in Faskari Local Government Area in Katsina State where 38 members of the community were kidnapped on Sunday.
Barkiya in his emotion laden voice said, “I can say that enough is enough, what is happening is that we should not only continue to condemn but we must also have to do something very serious.
Directing his comments at the authorities he seemed to be telling the Federal Government to do the needful by giving a marching order to the military to bomb the bandits in their hideouts since they had already been declared as terrorists.
“We can not just sit down after declaring these bandits terrorists and then allow them to continue with all these kidnaping.
“We have to look at it critically, the security agents may be doing their best but for me they need to do another best, just look at 38 person’s, how can they just kidnap 38 persons after declaring these people as terrorists why can we just go and bomb them.
“Condemning, condemning everyday is not enough. I am saying we can not continue to condemn, ask NEMA to do one thing or the other, we have to definitely look at it and then do something more seriously. We know where they are, everybody knows where they are.”
Senator Bello Mandiya (Katsina South) who sponsored the motion in his lead debate said the act of banditry and Kidnapping have become a daily incidence now in Katsina with consequence of lost of lives, means of livelihood and displacement of communities
He indicated that last Sunday being 31st January 2022 gunmen struck in Faskari Local Government in Katsina State where 38 members of the community were kidnapped
“The federal Government has made Frantic effort in curbing the menace by setting up operation of Sharan Daji an inter agency task force to tackle cases of banditry cattle rustling and kidnapping in Katsina State .
He expressed concern that the continuous security challenges and related attacks by bandits on towns, villages and communities in Faskari Local Government Area have meted untold hardship on the people and have subjected the affected areas under serious survival threat.
“If this menace is not drastically and promptly addressed, the consequence is going to be huge on food sufficiency since the affected communities are mostly farmers.

He urged the Federal Government to send enough military personnel and tighter jets to apprehend the bandits and restore normalcy in these areas,

Making his contribution to the motion senator Muhammed Adamu Aliero (Kebbi Central) said it is a national disgrace that this thing is happening on daily basis adding that something needs to be done urgently
He however asked that the security forces be encouraged or supported. “We have to ensure that every part of this country has enough security agents to take care of every place. If it is the issue of recruitment in the army we should do so.
“We have provided support to the security agents, Last year alone supplementary appropriation we approved over N865b and this year’s budget we have about N1.3trn and we are getting little in terms of the outcome.
“By now we are supposed to have a very peaceful country but unfortunately on daily bases we hear people being kidnapped, killed. Enough is enough, there is need for security agents to do whatever is humanly possible to curb this menace. It is a national disgrace and something needs to be done.”
The Senate President, Ahmad Lawan, in his remarks said the repeated cases of kidnappings and killings makes it imperative for the military to “wake up” to protect Nigerians.
He wondered why full scale action was yet to be carried out by the military in spite of increased funding for security in the 2022 budget by the Executive and National Assembly.
He said, “The expectation of their Senate is that there is supposed to be a remarkable difference in success in terms of the fight against insurgence, banditry and militancy in Nigeria.
“The military is getting better funding from the government and what we expect is to see an improvement in output.
“I know the resources are not enough, but recently for one and a half years, government has upscaled the level of funding for our military.
“Secondly, when we declared the bandits as terrorists, my understanding was they are going to be dealt with ruthlessly now. I wonder whether that is the case.
“The military like some of our colleagues have said, need to wake up. We want to see a difference because we have made a difference in terms of funding.
“I know funding alone will not be enough, but funding can make a difference and we expect a difference in outcome.
“Thirdly, we need to mobilise our citizens, because when a hundred people are kidnapped and abducted, they are not taken by aircrafts, they are taken by motor bikes, pass through the villages and possibly towns, how come do we then say that nobody has seen something?
“We need our citizens to be part and parcel of our security architecture. In fact, there’s no way we can achieve better security for this country without the participation of the citizens in the fight against Insecurity.”
Accordingly, the Senate urged the Security Agencies to comb all known hide outs of the kidnappers in a bid to rescue the Thirty Eight (38) persons abducted by the gunmen in Ruwan Godiya.
It also called on the Federal Government to send enough military personnel and fighter jets to apprehend the bandits and restore normalcy in the affected areas

The Senate in it’s resolution urged the Federal Government to, as a matter of urgency, send fighter jets to flush out terrorists in their hideouts who are behind the kidnappings and killings of Nigerians.