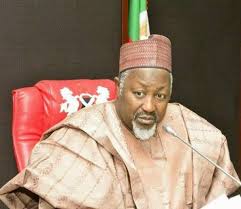 Jigawa state has received the sum of N13 billion world bank grand, for emerging best performing among 36 states on the State Fiscal Transparency and Accountability Sustainability (SFTAS) project initiated by the federal government in collaboration with World Bank

Governor Muhammadu Badaru Abubakar of the state made the disclosure while receiving a State Fiscal Transparency and Accountability Sustainability (SFTAS) monitoring team from the federal ministry of finance.
He said the state had received the sum of N13 billion grand in two installments for being best performing state on the project.

According to the governor “the most impressive thing is that, we in Jigawa state made all our success by our shelves without involving or employing the services of any consultant”.

The governor maintained that being a chattered accountant himself, his deputy and commissioner of finance also chartered accountants they are coordinating the project without involving consultants.

Governor Abubakar added that “Due to this we saved the state more than N2.7 billion, 20 percent that would have been paid to consultant.”

He explained further that they are achieving a lot in the state as a result of their strict adherence to the SFTAS guidelines and technics in the areas of both human and infrastructure development”.

“I’m proud to inform you that Jigawa state is the least in term of internal and external borrowing. We always paid workers salaries and pension aa att when due. All this is as a result of Transparency and good accountability”, Gov Abubakar emphasized

The governor noted that “since we came to power because of our financial discipline, we paid workers their salary 25th of every month and pensioners received their pension in the first week of the month”.

He therefore commended president Muhammadu Buhari and world bank for the initiative.

He also promised to maintain and sustain the strategy and the policy.

Speaking earlier the team leader and deputy SFTAS coordinator in the ministry of finance, Alhaji Ali Muhammad said they are in the state to interact with the project stakeholders to hear about the successes and challenges of the project (SFTAS) in the state.

According to him the aim of the project is to strengthen the fiscal transparency, accountability, and sustainability in the participating states.

He added that “The program is a hybrid with two components of activities that support Nigerian states to achieve the key result areas of the program.

Alhaji Muhammad maintained that a performance-based financing component for state governments, which will be implemented and a technical assistance (TA) component for states and selected national-level institutions will “Strengthen the fiscal transparency, accountability and sustainability in the participating states, including the context of the C OVID-19 response”.