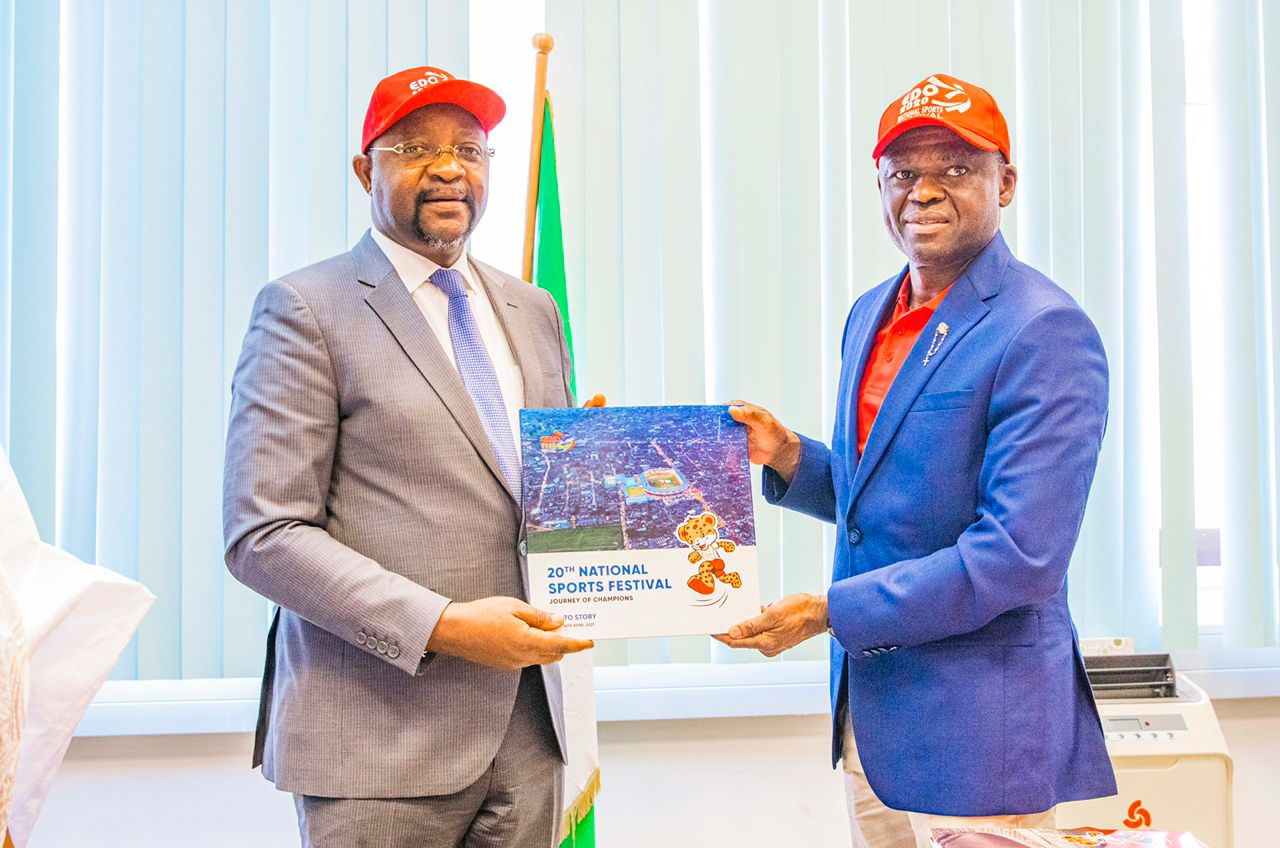 The Federal Government, on Tuesday, received the Edo 2020 National Sports Festival report from the Local Organising Committee (LOC).
Director press and Public Relations
Muhammed Mangal in a press statemen the Minister of Youth and Sports Development, Mr. Sunday Dare, received the report in his office at the Moshood Abiola National Stadium Abuja.

He quoted the minister to have assured that government will look into the recommendations contained in the documents, with a view to adopting possible areas of collaboration with the State.

Dare commended the Local Organizing Committee (LOC) and Edo State Government in particular, for investing so much towards the successful hosting of the Sports Festival, inspite of the COVID-19 Pandemic, stating further that the Ministry will do everything humanly possible to ensure that the State is supported within the limited resources.

He said that the report received is a significant and pioneering event that has never happened before.
“This is the first of its kind; for a host State to officially submit the Report of the LOC of the Festival to the Ministry, as such, it is commendable. I hope that the subsequent hosts will emulate the good gesture from Edo 2020 LOC,” Dare said.

The Minister explained that with this performance, the Federal Ministry of Youth and Sports Development is indeed grateful to the Governor of Edo State, Mr. Godwin Obaseki and the good people of the State for their hospitality and the tremendous effort which culminated in making the event a huge success.

While thanking the Chairman of the Local Organizing Committee (LOC), Comrade Phillip Shaibu, for his doggedness in the organization and management of facilities and the resources at his disposal, Dare assured that the report will be looked into critically and the recommendations considered accordingly.

Mr. Dare commended Comrade Shaibu for recognizing and supporting the “Adopt an Athlete initiative” of the Ministry, as he was the first to adopt an athlete, adding that “it was a pilot attempt towards the Olympic Games, and the impact was felt.

He reiterated that the partnership between the Ministry and Edo State is a dynamic one and will continue.

Earlier in his remarks, the Permanent Secretary of the Ministry, Alhaji Ismaila Abubakar expressed his sincere appreciation to Edo State Government for accepting to host the Festival at a time the country was in the woods, demonstrating their love for the Nation.
He stressed that Sports is no longer an entertainment as it creates jobs, taking the Youth away from the streets.

While presenting the report to the Minister, the  Chairman, Edo 2020 Local Organizing Committee (LOC), Comrade Phillip Shaibu thanked President Muhammadu Buhari for granting the State the opportunity to host the Festival, and giving it an insight of what hosting a Sports Festival looks like.

The hosting of the Sports Festival, particularly in the wake of the COVID-19 pandemic Shaibu said, was not only a trial and setback for the State, but it also provided for more commitment towards hosting the Tournament.

“The COVID-19 was a setback, but the State had the tournament, that during and after, recorded no single spark of COVID-19, a report which helped the World Olympic Committee in their decision towards the hosting of Tokyo 2020 Olympics,” he stated.