Tinubu threatens to be indecent if his presidential ambition is endangered 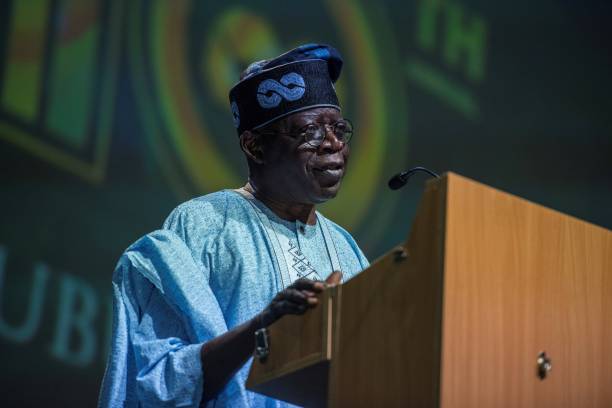 Any attempt to truncated the presidential ambition of the National leader of the ruling All Progressives Congress (APC), Ahmed Bola Tinubu would be met with equal and opposite reaction even if it means employing indecent means, the aspirant has threatened

Tinubu who made the statement while on a consultation visit to the Alaafin of Oyo, Oba Lamido Adeyemi, and the Olubadan-elect, Chief Lekan Balogun on Sunday said, he would get dirty, if there are plans to halt his ambition of becoming Nigeria’s president.
While at the palace of the Olubadan-elect, Tinubu who was apparently piqued by those who may be planning to halt his presidential ambition, indicated that no amount of intimidation would make him back down.

According to him he visited Ibadan and Oyo for the respect he has for the royal stool to seek their blessings and prayers to lead the nation in 2023.

He said: “No amount of intimidation can stop me. I am ready to get dirty. I am out to become President of Nigeria. We are at the crossroads.”

While at the Alaafin’s palace, he said: “I cannot embark on a project of such magnitude without seeking for prayers and cooperation of the traditional rulers.

“I am here to inform our fathers of my decision to run for the position of the President of this country in 2023. What I need from our highly reverred traditional rulers are their prayers and cooperation.

Tinubu, however, appreciated that the Yoruba has the Vice President, Minister of Works, Minister of Interior and Minister of Sports, but said, Yorubaland need more.

Oba Adeyemi while responding told Tinubu that that his ambition has been granted, stating that all the fore-bears would work for him.

He, therefore, asked the 10 Oke-Ogun traditional rulers in attendance at the meeting whether they were in support of his decision, and their response was: “We are fully in support.”

In the same vein the Olubadan-elect, said they knew Tinubu and his antecedents as a progressive person, noting that he laid the foundation of modern Lagos State.

“You laid the foundation of today’s Lagos. You are the leading light of Nigeria. You contributed to making Nigeria what it is today.

“Without Yoruba, Nigeria will not be what it is today. Nigeria is badly divided. We are looking forward to a Yoruba president who will unite this country. We need a leader that will have a national focus and national acceptability. The road may be rough but by His grace, you will triumph.”