Why Tunde Gbadamosi was allegedly thrown out of Amen Estate 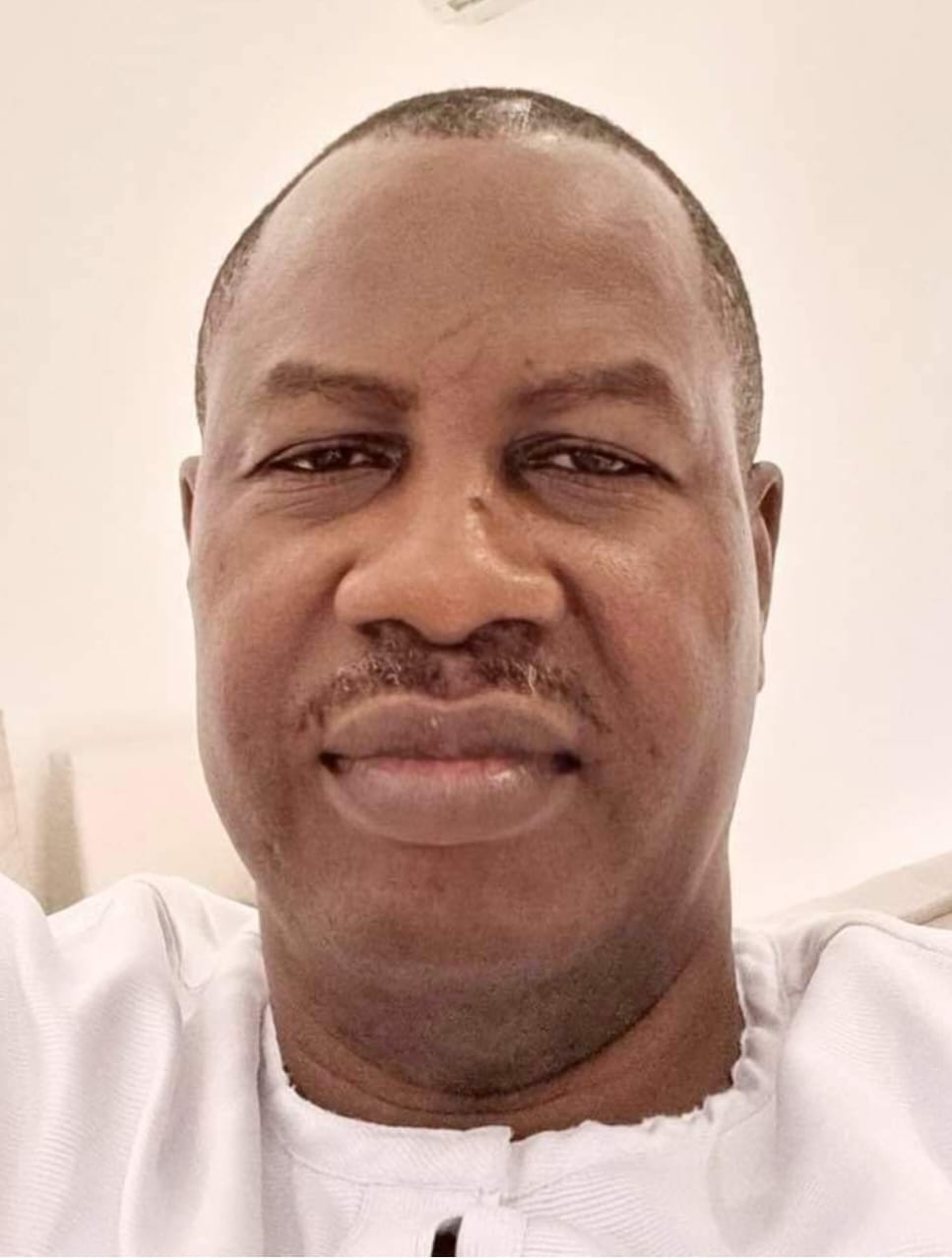 More details on the frosty relationship between former Lagos governorship candidate and politician, Babatunde Gbadamosi and his ex wife, Sade Balogun have emerged.

While Gbadamosi has been all over the place crying foul and claiming part ownership of Amen Estate, a Highbrow Estate in Lagos, Sade who is Chief Executive Officer of the holding company, Redbricks Home International Limited, has renounced her former husband and disclosed that he was nothing more than a mere sleeping partner who did not have a single financial commitment in the business and had since voluntarily resigned from his position as a director of the company.

Trouble started brewing between the duo when Babatunde Gbadamosi met and married the London based daughter of a top politician, Yinka Balogun, now Yinka Balogun Gbadamosi.

While Gbadamosi has been putting out statements warning clients not to do business with Redbricks Homes, his ex wife, Sade released a statement proving that the politician willingly resigned in the presence of his lawyer and a witness, with proof of his resignation letter.

The statement which was released in top national dailies reads:

PUBLIC NOTICE TO ALL INVESTORS AND POTENTIAL INVESTORS

For the avoidance of doubt, once upon a time, Mr Gbadamosi, a full time Politician, used to be a sleeping partner/shareholder without any financial investment and one of the Directors of Redbrick Homes International Ltd, but he has since voluntarily transferred, for consideration, the entirety of his shares in Redbrick Homes Intl Ltd and has also resigned his directorship of its Board since July 1, 2021.

The Board composition, shareholding structure and share capital of Redbrick Homes International Ltd has accordingly changed completely. Folasade Balogun
(formerly Folasade Gbadamosi) remains the Chairman and Chief Executive Officer of Redbrick Homes Intl Ltd, a position she has served in since the inception of the
company and under her leadership, Redbrick Homes Intl Ltd has continued to deliver quality service to its customers uninterrupted. These facts can easily be verified at
the Corporate Affairs Commission.

However, we are aware that Babatunde is challenging his own voluntary resignation, that was signed in front of two of his counsel, two of our counsel and a notary public, on the grounds that he signed under duress.

Our Lawyers, Babalakin & Co are dealing with this. The Suit No is: FHC/L/CS/742/2021 at the Federal High Court, Lagos before Justice A.O Faji.

For over 12 years, Redbrick Homes International Ltd have been one of the leading and most reliable posh properties provider in Nigeria. Our dedication and commitment to our cause remain unwavering, and you all can be rest assured that your satisfaction and the safety of your properties and investments will never cease to be our topmost priority now and always. Our doors are open, and we also
reassure you that acquiring lands and properties with us are not only completely safe and risk-free, it is also the choice thing to do.

We use this opportunity to express our sincere appreciation to all our customers and potential customers for standing by us over the years and wish to reassure them even more, that we would not compromise on our excellent service that they have become accustomed to. Thank you.

Concerned society watchers are wondering why Gbadamosi is filled with so much bile, after hurting his ex wife so badly and why his new found wife has embarked on a smear campaign against her.

According to a resident of Amen Estate, home owners were very pleased when Gbadamosi was sent packing by Sade:
“This was a man who strutted the estate with so much arrogance and high handedness. He was always fighting with residents. There was a time a driver was waiting to pick up his boss and Gbadamosi began to raise hell because the driver packed on the road just outside the boss’ house.
He interfered in almost every home, would be quarrelling over sprinklers, people going about their normal life, jogging around the estate, as if they had no right. He was a menace that we are so happy is gone. Good riddance to bad rubbish”

Those in the know say Sade picked the former guber aspirant from ignominy and gave him a bearing through which he could even vie to be governor but he broke her heart and her trust:
“The best thing to happen to Sade is kicking out that man from her life.
He was a serial womaniser who even caused problems between a couple in that estate.
It’s so funny that he is the one now accusing her of infidelity when we all know how he ran after women, married and unmarried.
Do you know that this man was always going behind collecting ten percent money from contractors, behind Sade’s back?
One good thing though is that Sade was smart enough not to give him full control of the business, he would have wrecked it.
This is a man who would corner intermediary agents wanting to sell homes and tell them home owners must approach the company and the company must act as agent to sell any house within the estate. All he wanted was to corner the money.
He was a big man without cash.

Why else will a wife throw out a husband with his clothes and only one car? Director my foot!” Said another resident.

Many wonder why Sade has remained silent especially as the marriage between Tunde and Yinka was contracted when they were still legally married.
“Do you know she endured eight months of cyber bullying from that woman and kept quiet?
She should sue him for bigamy. The man is just a gold digger but she is considering the children, poor woman.” Said a family source.

Social media watchers are regaled with mudslinging directed at Sade by the new wife, Yinka Balogun Gbadamosi and wonder why a woman who came to snatch another woman’s husband is now the aggressor.
A keen observer noted that Sade has been the target of Yinka’s post for almost six months now:
“She behaves so foolishly, she thinks she has seen husband, she has forgotten that the cane used in beating the first wife is waiting for the second wife.
Gbadamosi is a smooth talker and liar who has simply latched on this new one for political and other gains, her own day will come…these London girls should start using their brains”.

Another source close to the family said,
“Obviously, Tunde is using Yinka to fight his ex.
Gbadamosi himself is not talking about any infidelity, it is Yinka who came to take another person’s husband who is talking.
As someone who has worked in government house, has properties to her name, she should be very careful herself. I learned she has moved into another Estate on the Island with her new husband, I hope she knows that he drove the new car close to Amen Estate just to show off?
This new woman who is obviously over exuberant thinking she has seen husband, should listen to the advice of her elders. A word is enough for the wise. A Gigolo is always a Gigolo.

“The truth of the matter is that, Yinka Balogun thought he was chairman of Amen Estate and probably still believes that lie.

Gbadamosi too was hoping to leverage on her dad’s position.

Giving more insight, sources close to both parties disclosed that Gbadamosi met his new wife Yinka Balogun on Facebook and got married to her on his wedding anniversary to Sade, which according to the source, is very sinister:
“Do you know Tunde and Yinka met on Facebook and coincidentally Yinka and Sade share same surname, Balogun.
As if there is something else behind the whole affair, Tunde chose his wedding anniversary to Sade to wed his new found lover.
Where we come from, we would say, you want to cancel one to replace another. God has been on Sade’s side because we learned that her ex husband is allegedly very fetish”.

As it stands now, it is obvious that the tumultuous business relationship between Babatunde Gbadamosi and Sade has broken down irretrievably and Gbadamosi has been kicked out of the business for good.