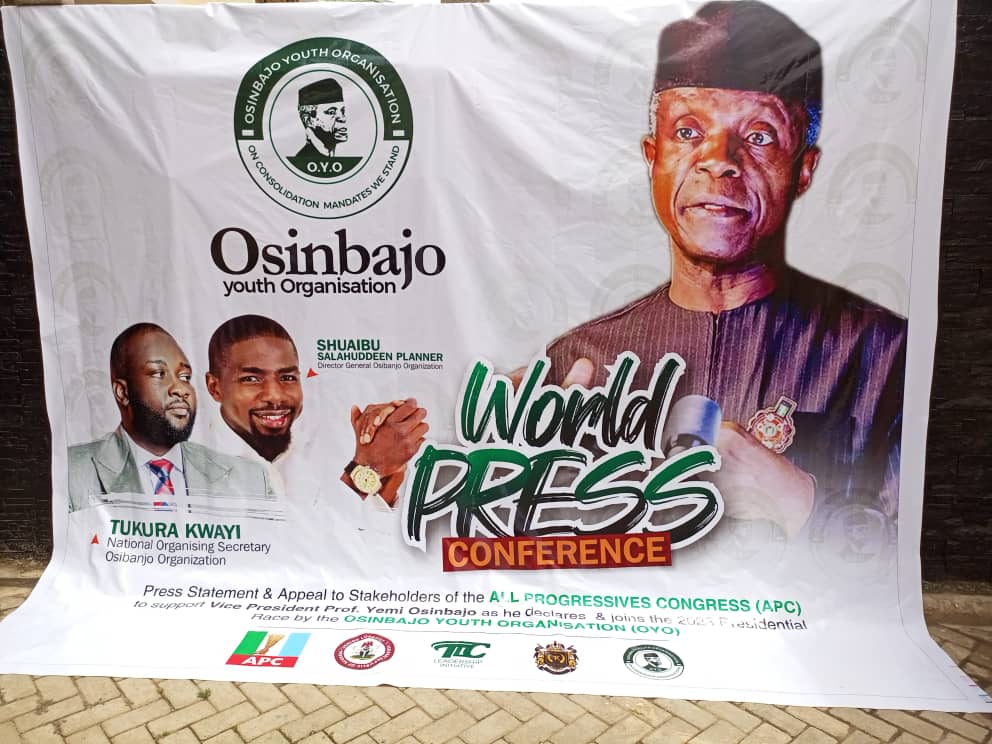 A group under the auspices of Osinbajo Youth Organization (OYO) has indicated that the Vice President Yemi Osibanjo will declare to run for president of Nigeria immediately after the All Progressives Congress (APC) convention in March.

Director-General of the group Ambassador Salahaddeen Shuaibu at a press conference in Abuja on Saturday, said,

“I can confidently tell you that the Vice President has agreed to declare to run for the office of the president immediately after the APC convention in March.

“As group of youths who believes in this country we have been making calls, we are stakeholders as far as the Nigerian project is concerned, apart from that we are the greatest assets which this country possess as a nation so governance business is our business.

“As youths we believe Nigeria as a nation is in dire need of a leader who is being guided by integrity, principle and ability to do.

“Osinbajo is that one man and we have been recieving calls across the length and breadth of this country.

On whether the Vice President will be displaying disloyalty to his former boss, the former Governor of Lagos State and leader of the APC, Nola Tinubu he said,

“I will still describe the vice president as a loyal person if he decides to declare to run against his former boss whom he served as Attirney General and commissioner for justice in Lagos, Asiwaju Bola Ahmed Tinubu because Osinbajo’s Loyalty is that loyalty that is to Nigeria as a nation not to an individual and the call by 100m Nigerians should not be turned down because of the interest an individual. His Loyalty to Nigeria comes first

“Osinbajo is that fine leader we are blessed with in the 21st century that any nation would like to possess, he is an asset, innovative and an intellectual.

“As a pastor he will be fair to all, as a lawyer, he will maintain justice and uphold rule of law and as a professor he will revive the lost glory in education and so whether Osinbajo likes it or not, we the youths will compel him to contest because he is the kind of leader Nigeria requires in the 21st century.”

On the fact that Osibanjo cannot be said to be in the age bracket of the youths, he said,

“I see Osinbajo as a young vibrant Nigeria, he is a Sexigenarian by age but a youth by action, a youth by physic, a youth by intellectual capacity, so we see him as one of us and moreover Osinbajo has not overstayed his welcome in the Nigeria Natiknal political cycle. “We see him as that new person we want to see in the political arena of the country

On the fact that Osinbajo may not have the money to woo voters, he said

Nigerians across the length and breadth  across political parties  have found the kind of leader they desire in Osinbajo with or without money.

“Many Nigerians are ready to sacrifice and vote for Osinbajo. This program we are holding we are doing it within our means because of patriotism and because we believe that he is the only person this point in time  who can deliver this country.”