Adebayo tackles Buhari for sustaining subsidy he said was a scam 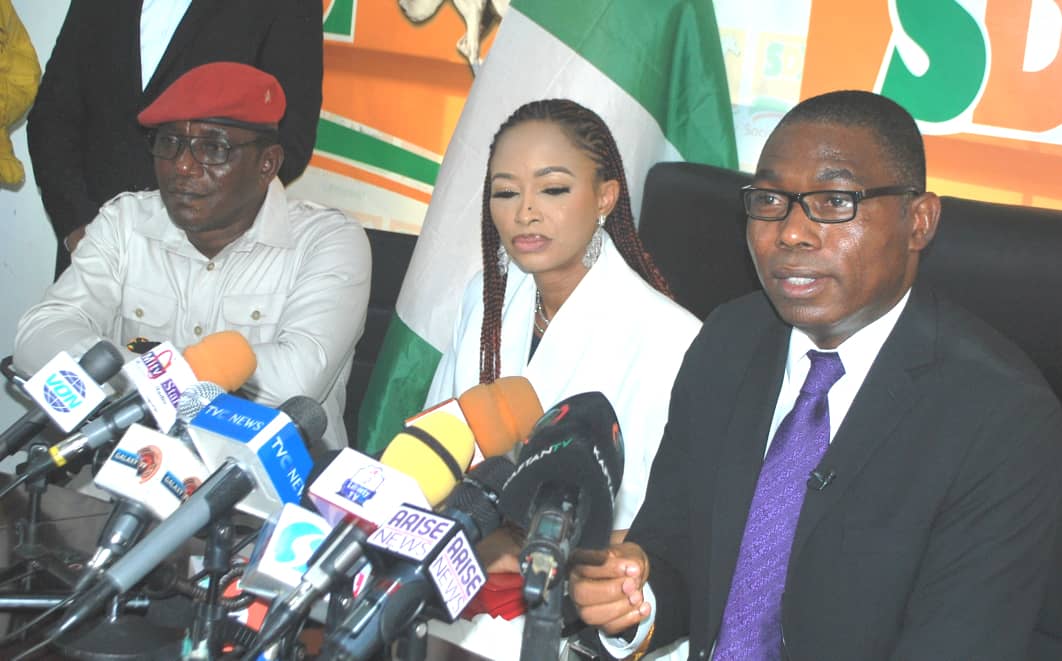 A presidential Aspirant on the platform of the Social Democratic Party (SDP) Prince Adewale Adebayo has described fuel subsidy as the greatest scam of the century that has continued to put Nigerians under pressure.

He mocked the President Muhammadu Buhari led All Progressives Congress for sustaining what they said was a fraud
He spoke Monday at the SDP secretariat in Abuja when he submitted his letter of intent to contest the 2023 presidential election on the platform of the party.
According to him, President Muhammadu Buhari himself in 2015 said so when he was still campaigning to be elected.

“Remember there is a gentleman, I dont know if you know his name, he said in 2015 that anybody who is talking about government giving subsidy he should be arrested, that person is President Muhammadu Buhari in the Villa now. “Let me tell you what is happening to us is not governance, it is criminality and we need to put an end to it.
“What is happening is that a large chunk of our crude oil being sold is being stolen by the government and its friends, that is why you can see that oil price went from $34 to $104 but the Naira does not improve there is no witchcraft as active as that where your main product is rising in price but your currency is falling, why is that because the money is outrightly being stolen.
“They are stealing money from the crude, therefore the money they ought to use to put the refineries in place or build more refineries are being diverted overseas. “Secondly they have a committee of friends who need money for election now, so because they need money for election they committed two crimes, one, they brought adulterated fuel into the country to come and knock our engines so that you don’t run your Uber and take your children to school, secondly they are holding all the depots and putting them under so much tension.”

He said the fuel crises is so that by the time they come with surplus supply of fuel it will be like benevolence, ‘we will give you fuel now but you have to pay more’
“This is the antics of kidnappers and the bandits that the government is employing so there is no way they can claim that they are giving us subsidy.

According to him, the solution to insecurity is the same solution to fuel scarcity and unemployment which he said can only be achieved with a competent Government that is determined to solve the problems.
“It is because the insecurity has been turned to a business that it is difficult to nip Bokoharam and insecurity in the bud.
“I have confidence in the Nigerian armed forces and Nigeria security to be so strong and sufficient to secure the country
“We have refineries which supposed to give us about 75% of what we need they killed the refineries.
On what he was going to do differently he said
“I am in this race not to make it but for Nigeria to make it and SDP is a party I examined that has had problems because they don’t believe in cutting corners and is a party that is just ripe for people like us who are connected to the people of Nigeria who are not money bags who want to do what Abiola did in 1993 which is using SDP to galvanize Nigerians together.
He said it is not a political party that wins election, but the people of Nigeria that make the party to win.
“What SPD is working with us to galvanize the Nigerian people so that the power which is to be won can be freely expressed in a free and fair election and when that is expressed Government will express the dividend of democracy on the people.

He said there is combined alliance with other parties to be able to get the people of Nigeria, taking advantage of the electoral act that has been passed, we are going to win the election not just by saying so but by working very hard in each of the 186000 plus polling units.
“The new thing we are bringing to the table is our newness, we are coming with fresh people, fresh minds, there is an abiding understanding of the problems.
“The problem of Nigeria is not economy, it is not finance, it is not infrastructure the problem is character, the leadership character has been missing and people are not doing justice in office because they appropriate these offices to themselves, appropriate the resources of the office and all the privilege of governance is appropriated to themselves, family and their friends.
“The things that made politicians to succeed in the first and second republic was leadership character, patriotism and justice
“We cannot look at the faces of those ruling us today and say which of them is displaying character, patriotism and justice? None
“So if we install these principles which money cannot buy and you make them to work in this country, everything will work.
On what he has in stock for the women, he said,
“For the women they are half of the country, they are the mothers of the country and I have brought my own mother here and my wife, my daughter
“The way to solve women’s problem in Nigeria is not to make women symbols of campaign it is to tackle problems that women cry about, if you go to the churches and mosques, you could see that women cry about insecurity, unemployment and immorality

“If you have a country doing well it is the children of the women that are doing well and they themselves would be free to explore the quality that God has given them.
“You can not run Government without involving the women because they know the issues, they may not know the politics but they know the issues
I was raised by women, I lost my father when I was very young.
“I was raised by my mother and my grand mother and I know that I am who I am today by virtue of the fact that I was raised by strong women.
On Education and power, he said the problem with electricity is not witchcraft, it can easily be generated even in the homes.
“You can buy a small generator or solar panel somehow electricity work in your house that does not work in government because money voted in the name of power or energy is spent for politics.
“So you will find out that despite all the money
Close to 8years the present administration has generated negative energy even though they spent billions.
“You will see that if money meant for energy is not diverted and if money meant to distribute power utilized is and they apply the technology the same way generator will work in your house electricity will work in Nigeria.
He said it is the same with education, “I was in the university in 1998 in the university of Ife, I spent two and a half years extra because of ASUU strike and our ministers at that time Jibrilu Aminu and Fafunwa, the argument they gave was that there was not enough money to fund the university, then ASUU with government came with the idea of Tertiary Education Trust Fund, (TETFund)

“Now we have too much money yet ASUU is on strike because as soon as the money accumulated the people in politics took over the ministry of education and started sharing the money so there is too much money
“What I am going to bring is to ensure that TETFund is managed by those in the academia and government would not have any role to play in it.”-