APC plays the ostrich over leadership change, even as Gov Bello presides as party chair 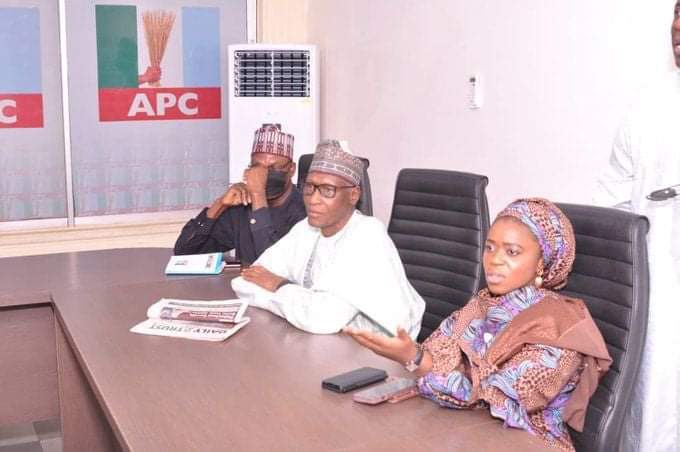 The ruling All Progressives Congress (APC) seems to be playing the ostrich over imminent implosion of the party as it now lives by speculations
The crisis rocking the ruling party took a twist on Monday as the Governor of Niger State, Abubakar Sani Bello, confidently drove into the secretariat of the party parked his car on the spot for the CECPC National Chairman.

He presided over the party’s meeting at the National Secretariat of the party in Abuja.

Photographs of Governor Bello presiding over the meeting of the APC ignited more speculations about the leadership of the party.

The party however denied the speculations in the Media that the Caretaker/Extraordinary Convention Planning Committee Chairman, Governor Mai Mala Buni had been removed.

The party has described as fake and imaginary, the report in some sections of the media, of a purported leadership change in the party.

Senator John Akpanudoedehe, the National Secretary, APC Caretaker and Extra-ordinary Convention Planning Committee (CECPC), said this in a statement on Monday in Abuja, in a reaction to the report.

“Our attention has been drawn to sponsored media reports of an imaginary leadership change in the APC CECPC. The media report is fake news and should be disregarded.

“The APC is a progressive political party guided by rules. Leadership changes are not announced by ‘sources’ through name dropping in the media,” Akpankudohede said.

He, therefore urged the party’s teeming supporters, members and the general public, to remain calm.

The APC stalwart also asked members of the party to continue to support the Gov. Mai Mala Buni-led APC CECPC, to conduct a rancour free and credible National Convention, deserving of the party.

A section of the media had at the weekend reported that President Muhammad Buhari had sacked Buni as the Chairman of the APC CECPC and appointed Gov. Sani Bello of Niger, as sole administrator of the party.

Governor of Niger State, Abubakar Sani Bello, held an emergency meeting with some members of the caretaker committee of the All Progressives Congress (APC) ahead of his assumption of the leadership of the party.

The meeting it was gathered was convened to implement President Muhammadu Buhari’s directive on the removal of Governor of Yobe State, Mai Mala Buni, as the chairman of the ruling party’s caretaker committee.

Buni took over the leadership of the party in June 2020 following the sack of Comrade Adams Oshiomhole- led National Working Committee (APC).