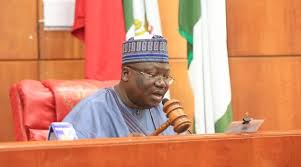 The Senate has just outlined the process for considering provisions in the bill seeking to amend the 1999 Constitution.

Laying the ground rule, President of the Senate, Ahmad Lawan said 68 documents in all harmonized by both chambers of the National Assembly will be considered for voting.

He said the chairman of the National Assembly Committee on Review of the 1999 Constitution and Deputy Senate President, Ovie Omo – Agege will present the report upon which comments will be made by interested senators.

Lawan said electronic mode of voting will be adopted with members automated card will serve as voting card.

He added that the voting instruments have been tested and ready for the exercise.

He said “If a bill passes in the Senate and also in the House of Representatives, such bill must have passed the authorization of the National Assembly and will be transmitted to state Assemblies for concurrence.

“But if a bill passes here in the Senate and fail in the House of Representatives, it is dead. And vice – versa”.

Presently, the Senate is considering other matters on the Order Paper obviously buying time to allow for adequate number of senators needed to commence voting.