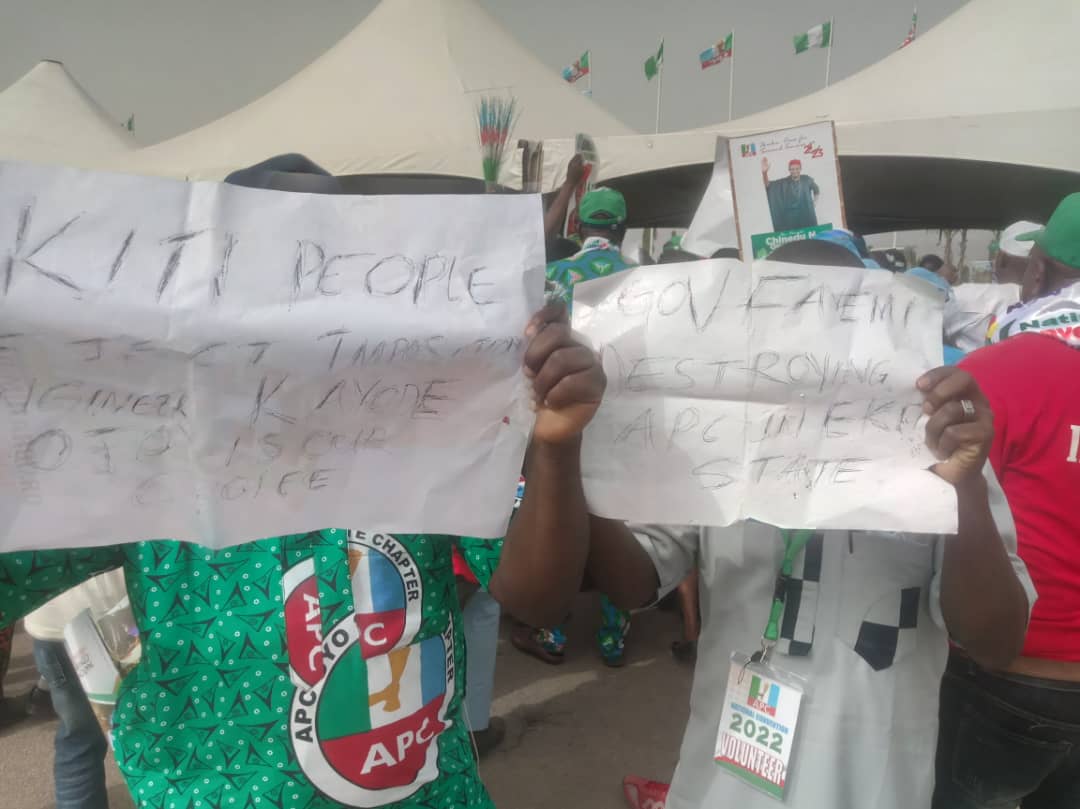 Some members of the ruling All Progressives Congress (APC) from Ekiti state on the platform of Ekiti Mandate Group have staged protest at the ongoing national convention of the party’s, rejecting the primary election that produced Biodun Oyebanji as party’s governorship candidate.

Oyebamiji, who is said to be anointed candidate of governor Kayode Fayemi emerged governorship candidate after other aspirants boycotted the primary election.

Staging a protest at the Eagle Square venue of the APC national convention, the Ekiti protesters in their hundreds were seen with placards bearing various inscriptions, calling on the party to recognise Eng. Kayode Ojo as the preferred choice to fly the party’s governorship ticket.

Some of the inscriptions include; “Return our stolen mandate” “Kayode Ojo is our choice”, “Governor Fayemi is killing APC in Ekiti state,” “we reject imposition” among others.

Speaking on behalf of the protesters, the convener of the Ekiti Mandate Group Abiola Oludele Timilehin, threatened that if justice is not done his group will end the reign of APC in Ekiti state.

Timilehin said: “We decided to create scene here at the national convention of our party so as to call the attention of our leaders to the calamity that’s about to befall our party in Ekiti if that kangaroo called primary election is not reversed.

“Recalled that the state’s governorship primary that was conducted on the 27th of February was reportedly marred by irregularities, which led most of the aspirants, including Engr. Kayode Ojo to call for its cancellation.

“The aspirants had accused Governor Fayemi of manipulating the process in favour of his own anointed candidate, who was declared winner that kangaroo arrangement called primary election.

“Our party leaders and the incoming National Working Committee (NWC) members must note it that Ekiti real members are aggrieved and nothing will perscify them unless our preferred candidate in person of Kayode Ojo is seen on the ballot.

“We, therefore, appeal to our leaders and the incoming NWC members to prioritise the need to urgently correct the injustice perpetrated by Governor Fayemi and his cohorts in Ekiti state before the governorship election to avoid the what happened to APC in Zamfara state, Rivers state and Oyo state,” Timilehin warned.