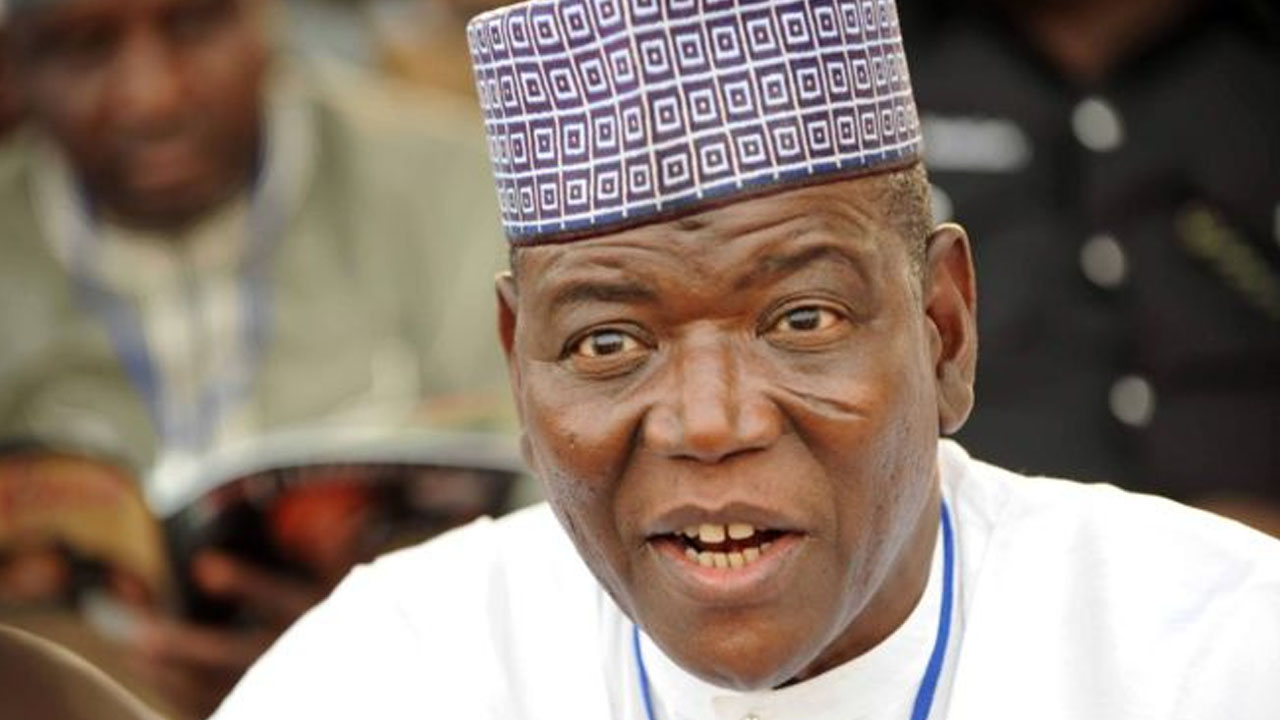 Former Governor of Jigawa State Sule Lamido in this interview with JOHN AKUBO spoke on the recent electoral act that was assented to by President Muhammadu Buhari, blaming lawmakers and their selfish interests for bringing in section 84(12), which Buhari asked them to delete. He also spoke on the issue of zoning, which he said was a creation of PDP in 1999 to heal the wounds of June12, 1993 election.

This is not the first Assembly to do that; tussle for power, influence between legislators and the executive seems to be an old one.
But then there should be something called maturity, character; there should be a moral benchmark because there are some things you don’t do because they are too obvious, you know people see through you.

In any case no matter what you do as a legislator, no matter what you put down as a law, by the time the Assembly runs out or expires you will go back to your state, your constituency and to your governor. All the noise you made to preserve yourself, when you return home they don’t matter. It is in the character of the National Assembly or legislature to attempt to use the authority of their office to promote their interest; that is normal but what we are saying is, it should be done with some degree of caution.

So, coming to what they did, you see, you cannot imagine somebody like Lawan, who has been there for so many years, since the beginning of this democracy in1999, from the House of Representatives up to the Senate, for 23 years to be superintending over something done against the Nigerian Constitution. The Constitution and what they call the civil service code for officers is very clear, how you retire, how you live and all that. Whatever they make of the law for their own interests, by the time the law is passed and signed by the President, that thing they put will not retain them in office. At the end of the day they are going back to their constituencies to meet the governors whom they have been fighting.

So, for me it is better to do the right thing. By so doing, you preserve the authority of the institution for the purposes of making good laws for Nigeria. That is very important. Because it is not the law they passed that brought them to that house; there were others who had been there before the present lawmakers. No matter what they do while they hold, sway in terms of putting a law to protect their interest, most of them wouldn’t come back. Anybody who dares to confront a governor by engaging in power contest simply because they are in the National Assembly, by the time they are through with their tenure they are going back.

I think the President is right. It is Buhari who is telling them their law is defective, in contrast with the Nigerian Constitution. I just can’t believe that, it is laughable and very embarrassing. Most of them are old civil servants, professors and lawyers. This is because they have been blinded by their ambition and they begin to address issues which are even illegal and against the Constitution. I see what they have done as a huge embarrassment to their individual personalities and to the institution of lawmaking because you can see their desperation to cling to power.

Don’t you think it is undemocratic for about 2000 appointees of a governor to participate in a primary or convention, when they’re likely to vote for the governor’s interest?
What I am saying is, you don’t make a law with something personal in mind or having any person in mind. Don’t make a law because you are APC and therefore you must support Buhari; neither should you make a law to attain your personal interest. Laws should be made as a process of doing good for the country and for good governance. Laws should be able to serve the Nigerian people; it should serve Nigeria’s interest, our collectivity not individuals’. So you don’t make a law with something in mind.

Now that Buhari has assented to the amended Electoral Act, what is the hope for a reformed electoral system; is this going to give Nigeria the desired democracy?
Nobody gives you democracy; you give it to yourself. Nigerians must stand up and fight for their rights so that by the time those who are trying to venture into using their position see that it cannot be tolerated, they will shape up. It’s not about Buhari giving to Nigerians any credible election. It is not for him to give, it is for Nigerians to stand up and say, we will stand for our democracy and enforce our rights. So, it is about time people begin to stand up and fight, not relying on anybody or one big man to work for them. Nobody will give them democracy on a platter of gold. They must fight for it; make sacrifices.
Recently when Sokoto Governor visited to consult with you on his Presidential ambition, you were reported to have said you are leaving the space for the younger generation, how true is that?

What will you then say of older persons seeking to be elected in 2023 like Atiku and Tinubu?
What I am saying is this, you see they have rights under our Constitution, and nobody should put any age limit at which you can aspire or not aspire for any office in Nigeria. It is the Nigerian people who are now harassing us the older generation, trying to drive us to our graves even though we have the wisdom; we have the expertise and experience. We have what Nigeria can tap from, but they said they don’t want it. There are a number of things we can offer but you don’t want them. So I am not desperate, I am only volunteering to offer myself for service, to serve you. If you say you don’t want it, so be it. I am not desperate.

When it comes to the issue of zoning, the PDP seems not to be saying the same thing as the APC. Does the Federal Character principle apply to zoning of political office?
You see, let’s be honest with ourselves and learn to be responsible. To attain a particular interest, you don’t need to go into extreme interpretations. Federal character is about employment, to be able to satisfy the Nigerian chemistry

Political parties have their procedure by which they elect their own leaders and their own members. The issue of zoning has a very clear history, it seems they have forgotten. Zoning was deployed and used in 1999 to address a huge political injury caused by June 12 and June 12 was not the making of the Nigerian civilians. In 1992 all Civilians were on one side and the military on another so the Military government created the problem not the Nigerian civilians.

Fair enough, we agreed to do zoning to heal the wound at that time and those who felt aggrieved we pacified them on our own volition as civilian people from our political parties. What of today? The scenario is different; the agitation today is caused by lack of good governance. If Buhari had succeeded in healing the country politically and economically, nobody will talk about zoning. So the scenarios and the situations are different.

Zoning ab initio was a phenomenon, PDP’s philosophy of addressing a very serious national injury, that was what we did. Today the injury is caused by the APC government. The distrust, hatred, poverty and what have you, are caused by APC government. Why should the failure of APC be foisted on Nigerians. It is for APC. The PDP sat down as a family, because we believe in each other, we trust each other, sat down and put forth a very strong political platform.

For the PDP what is the focus regarding 2023?
The beginning is for us to remember we were in power for 16 years, we know the history of Nigeria, we know our sacrifices and the efforts we made. But a party called APC, which was a contraption of various political formations, which was not organic, which had no political history and no particular philosophy beyond grabbing power came on board.

PDP in 1999 had a vision for Nigeria coming out from a very difficult history. APC came on board to grab power to blackmail that vision of PDP.

Before you talk of 2023 and beyond, first of all you have to remember, that PDP has got history, which is a Nigerian History. PDP was a political party for Nigerians. That is what we want first, a strong platform, a very strong one.

When the platform is very strong then you can put on it any political weight it will carry it. But when the platform is very weak and unorganized, divided, it will crumble under any political weight. So when the party is properly put together like the PDP, it will work for Nigeria not for any particular zone or region. That is when we can come and deliberate on how to put a candidate, the best person who will serve the Nigerian interest in office, it doesn’t matter where he or she comes from. It could be anybody, it could be a Southerner, a Northerner, a Christian or a Muslim or even those who worship Sango. Because by the time he is elected, and the process owns him, he is there for Nigeria.

What is your word for Nigeria as the race for 2023 begins?
My appeal is, let us for the first time, reflect to see where we are coming from? Where are we now? Where are we headed? Look at the rest of the world and their levels of attainment in terms of human development and then see how we can put Nigeria first and subdue our interests. Nigeria has done so much for us, it has been there for us let us for once be there for Nigeria whether APC or PDP. Let the country lead first. When the country is leading we unite around it but when you leave the country behind you, you are running alone and it will be really tiring. Look at our debt profile as a country and look at the individual Nigerians, you can see poverty in the people. So there is frustration and tension.

Culled from the Guardian