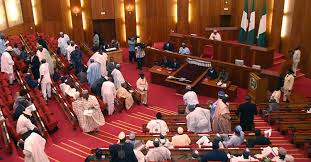 Senate on wednesday resolved to appeal the ruling of a Federal High Court in Abia State, which nullified the controversial section 84 (12) of the amended Electoral Act.

This was coming following a motion on Urgent need to appeal the judgement of the Federal High Court  Umuhia on Suit Number FHC/UM/CS/26/2022.

The section requires ministers, head of agencies and other political appointees to resign before participating in primaries, convention and other electoral activities.

However, the Federal High Court sitting in Umuahia, on Friday nullified Section 84(12), saying it was a violation of the provisions of the constitution.

Senator George Seikibo and 81 other senators sponsored the motion.

In a unanimous resolution the senators agreed to appeal the judgement suit marked FHC/UM/SC/26/2022 for the court to set aside the judgement.

While presenting the motion senator Seiko indicated that, the Electoral Act 2022 enacted by the National Assembly followed due process of the provisions of the 1999 Constitution

“The Senate opines that section 84 (12) of the 2022 Electoral Act exclusively refers to nomination conventions and congresses called for candidate selection and not participation in the general election which Sections 66(1)(f), 107(1)(f), 137(1)(g) and 182(1)(g) were referring to;

He expressed the believe that the interpretation of the meaning of the words ‘civil service’ and ‘public service’ as provided in Part IV: Interpretation, Citation and Commencement in Section 318 is unambiguous as given below:

(c) member of staff of any commission or authority established for the Federation by this Constitution or by any Act of the National Assembly; Government of the Federation;

(g) staff of any company or enterprise in which the Government of the Federation or its agency owns controlling shares or interests; and

(h) members or officers of the armed forces of the Federation or the Nigerian Police Force or other government security agencies established by law;

He noted that there is a difference between the civil service or public service and political appointment;

He expressed the believes further that letting the judgment go without concern will become a precedence on which any person could go to the court and obtain judgment to ridicule the good intentions of the National Assembly as an institution.