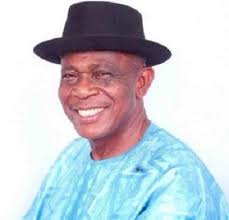 ***describes him as a jolly good fellow

A former President of the Senate, Senator David Mark has expressed shock and sadness over the demise of his colleague, Senator Patrick Enebeli Osakwe.

A statement by his Media Adviser, Paul Mumeh indicated that Senator Osakwe represented Delta North Senatorial Zone in the Senate between 1999 and 2007. He died in a London hospital on Tuesday evening after a brief illness.

Senator Mark in a condolence message to the government and people of Delta state on the demise of Senator Osakwe, described him as a jolly good fellow who was passionate about the peace and development of his constituency and beyond.

He said Osakwe was a fine parliamentarian who distinguished himself as a reliable and dependable leader.

According to Senator Mark “Senator Osakwe was a reliable and dependable friend and colleague. His robust and frank contributions to debates on issues of national interest will remain memorable”.
He noted that Sen Osakwe will be remembered for his positive contributions to the socio-political and economic development of his constituency.
Senator Mark urged the government and people of Delta state especially the immediate family to take solace in the fact that Senator Osakwe lived an eventful and accomplished life worthy of emulation.