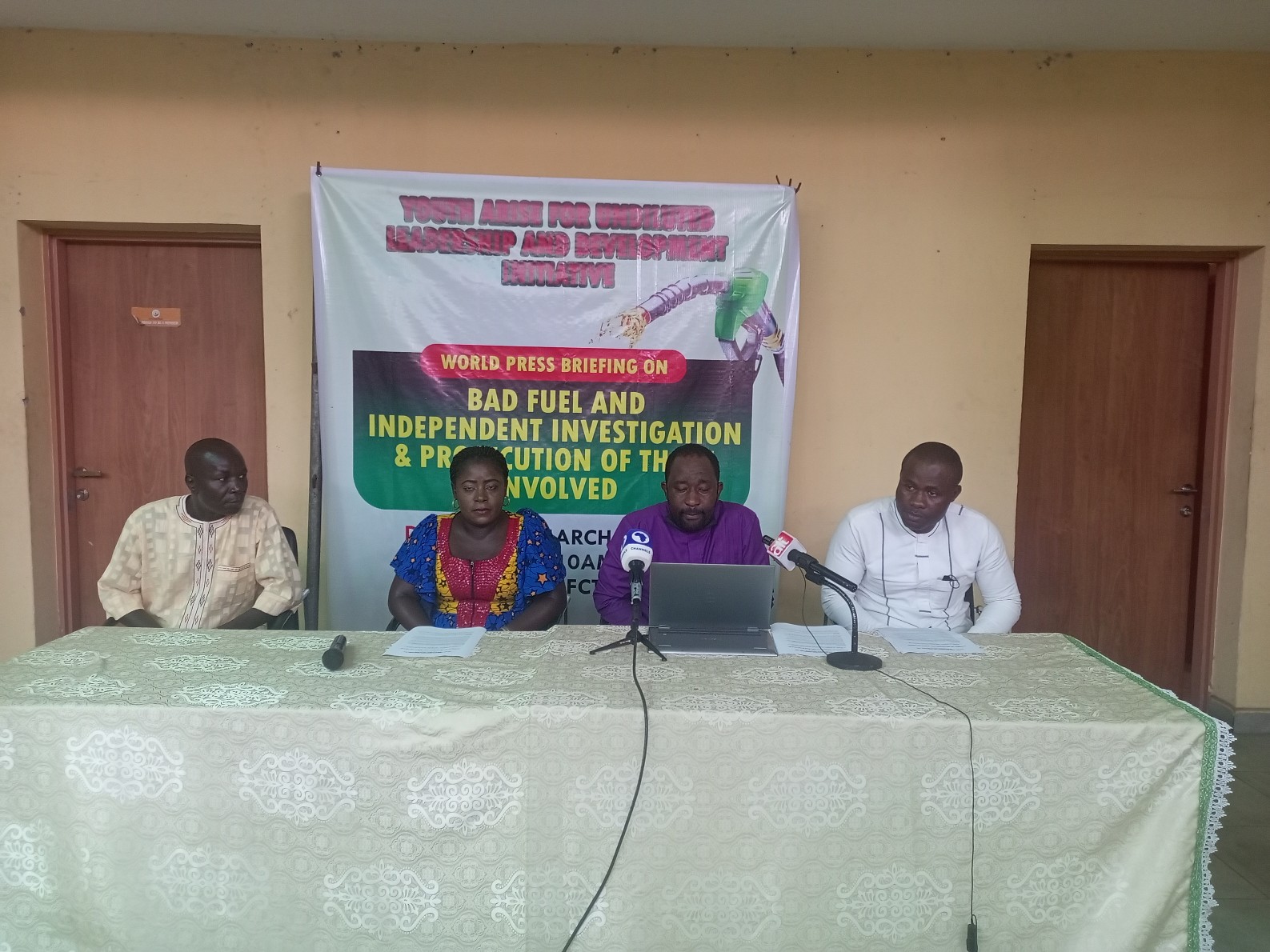 A group, Youths Arise for Undiluted Leadership and Development Initiatives has asked President Muhammadu Buhari to replace the heads of Nigerian Midstream and Downstream Petroleum Regulatory Agency (NNDPRA) and Nigerian National Petroleum Limited (NNPL) over the recent sabotage leading to the importation of contaminated petroleum products.
The action they observed has since triggered artificial and endless scarcity of supply in Nigeria.
They also asked the President to set up an Independent Panel of Inquiry into the circumstances that surrounded the importation of the contaminated petroleum products into the country by the NNPC and its contractors.
Speaking at a press conference held at the NUJ press center in Abuja on Thursday, the National coordinator of the group Akharame Lucky said “The conflicts of interests and the connivance of the two organizations are apparent.
“A regulator should be firm, proactive, assiduous, and protective of public interest. It is not the case with the NMDPRA.
“The NMDPRA CEO presents the organization as subservient to players in its industry, novice and completely incompetent.
According to him, the GMD of the NNPC has offered no reasonable explanation, proffered no working or workable solution to the protracted scarcity, which appeared totally in a quandary.
“These generally leave room for loss of faith in government. moving forward as the international price of crude gallops to new heights, amid the ongoing Russia-Ukraine War, can we honestly count on the Ministry of Petroleum, led by the President Muhammadu Buhari, to protect the best interests of the Nigerian public and shield us from the unexpected?
“Can we bet on a shoddy and seemingly shady operator to put Nigeria first?

“Can we rely on the proven and publicly self-affirmed incompetence of a wobbling and fumbling regulator to do right and affirm itself and not be in retreat and subservience to economic saboteurs?
The coordinator also asked several questions like whose responsibility it is to ensure that Nigeria does not get the short end of the stick in these transactions?

“Who has the legal role as guarantor of Nigeria’s energy security? Who identified the source of the supply? who approved the trade? “Which organization conducted the trade on behalf of the NNPC? What volume of products were involved and at what cost?

“Which agencies of Government are statutorily obligated to ensure that the best standards of products come into Nigeria?
“What role did the Standard Organization of Nigeria (SON) played in the process?
“Which organization is responsible for testing for the acceptable level of the different
components of petroleum supplies”

He also asked why punitive measures were not adopted against the saboteurs that imported the contaminated petroleum that has triggered artificial and endless scarcity of supply in Nigeria.
According to the coordinator,
“One thing is obvious, using NNPC Pensioners as Regulators in a sector where NNPC itself operates as a behemoth, cannot possibly bode well for Nigeria.
“It is not in the best interest of the Nigerian public. It negates the spirit of the of PIS
“Under the Petroleum Industry Act, the NNPC, led by Mr. Mele Kyari, is the sole importer of Petroleum Products into Nigeria, whether it chooses to do it directly or subcontract multiple organizations to do so. That fact must be laid bare.
“If NNPC chooses the latter, its direct or indirect culpability for the violation of any laws under the Nigeria state or infringement of the rights of Nigerians, in the process of fulfilling that statutory function, remain unquestionable.

According to the group, It is not enough for the NNPC to offer apologies but they demanded to know whether the apologies will automatically restore the several automobiles of fellow citizens that have been damaged by the substandard petroleum product imported into the country?

“It is now a matter of national security and overriding public interest for the Minister of State Petroleum, Timipre Syiva; the GMD of NNPC and CEO of NMDPRA (Nigerian Midstream and Downstream Petroleum Regulatory Agency) to present to the public the finding of their investigations into the importation of adulterated petroleum products.
“The four organizations earlier fingered; Brittania-U, AY Mai Kifi, Emmadeb and Hide-Energy, have all denied any wrongdoings.

“So, who imported the adulterated petroleum into Nigeria? Who certified its quality? Why is the downstream Regulator so reckless and incompetent?
“It is unacceptable for the head of a public regulator, managing a sensitive part of the economy to be junketing the globe while our citizens are subjected to so much misery caused by the abdication of its statutory responsibilities?